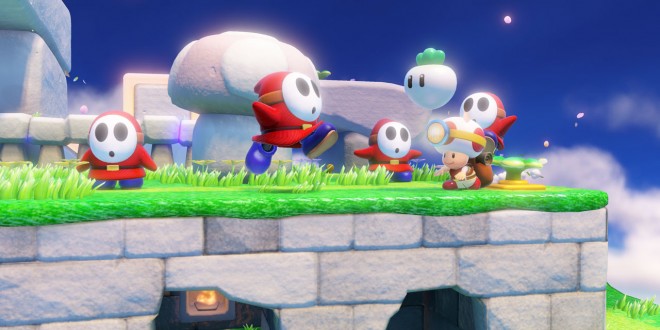 The Nintendo eShop update for December 4, 2014 is now live! The Nintendo eShop Update is published by Nintendo every Thursday for their Wii U and 3DS systems . This update includes full digital titles, Virtual Console releases and smaller indie titles. It can be a lot and while you could read the full text on Nintendo’s press site, we thought you would prefer to get the gist of the update along with some recommendations on what to keep an eye on.

Nintendo eShop on Wii U

Captain Toad Treasure Tracker – This adorable little title puts Captain Toad in the spotlight for the first time ever. Taking cues from the smaller side quest levels in Super Mario 3D World, you will play as Toad, who is unable to jump. He’s not like Mario, able to take down enemies easily. Instead you will have to navigate the small worlds by rotating the camera to change perspective. The title is only $40 and features a ton of levels with a lot of collectibles like all Mario games.

Sonic Boom Rise of Lyric Demo – The main game was panned critically so really this should be the only Sonic Boom content you play simply because it is free.

Ultimate NES Remix – this is a combination of both NES Remix and NES Remix 2 which released for the Wii U earlier this year. The games have been tweaked to run on the Nintendo 3DS. As a bonus you’ll receive a Famicom theme for your home screen when you purchase the game.

Fire Emblem (Wii U) – This is the first Fire Emblem game, made for Game Boy Advance. The game went on to spawn a very popular series that lives on to this day in the great Fire Emblem Awakening for Nintendo 3DS. My only gripe is that Nintendo still won’t put GBA games on the 3DS. And it’s not because the handheld can’t handle it since there were six GBA games given to early adopters of the 3DS.

Lode Runner (Wii U) – This NES title has you playing the titular Runner who must gather gold nuggets throughout 50 challenging stages.

This week’s choice is very obvious, Captain Toad Treasure Tracker is too cute to resist. The gameplay has been praised as iterating on itself again and again as it adds in new mechanics that are mixed and matched in more challenging ways as you progress. There’s no way you can say no. If not then pick up Fire Emblem on Wii U and bemoan the fact that Nintendo still refuses to bring it to 3DS.