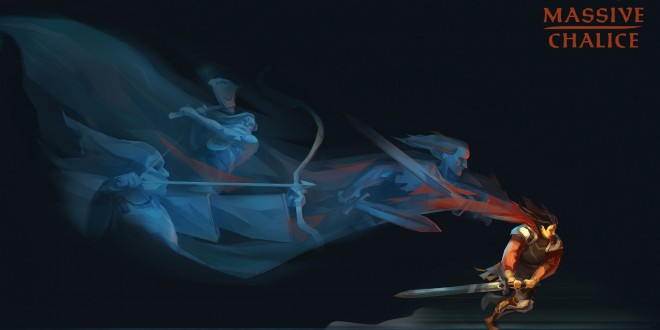 Welcome to the World of MASSIVE CHALICE! Where you are an immortal ruler inside of a… MASSIVE CHALICE! In MASSIVE CHALICE you will have to make some pretty important decisions and fend off the Cadence! An enemy shrouded in mystery. The Cadence are very interesting and make for a very intimidating foe. They have several different types of Cadence right now. I have seen the Rupture, basically a suicide bomber who leaves a nice puddle of corrosion in the surrounding area upon death. The Wrinkler, who will knock your heroes up in age, true story. The Twitcher, a big blue thing that will swap places with your hero. The Bulwark, who is a heavy hitter, but you also need to make your first shot count as it will only allow one damage for the rest of that turn. The Lapse, which steal your experience. The Cradle, which will spawn enemies named Seeds if not taken out quickly. The final one I have seen is the basic one, the Seeds, which like to run around and attack. The enemies in MASSIVE CHALICE are all drastically different in design and are as interesting as they are deadly. The enemies and battlefield also force you to switch up your tactics in MASSIVE CHALICE. As some enemies require you to move away and some will have you moving closer. Overall though, the tactics in MASSIVE CHALICE are there and it is some times very difficult.

If I had to compare MASSIVE CHALICE to anything it would be Xcom, except MASSIVE CHALICE doesn’t take it self so seriously at times. While I find myself getting frustrated at this game, I also find myself laughing at it as well. This is due to random events that happen and general misfortune that befalls upon my heroes. For instance, an old man came to me asking to show one of my heroes something dealing with corruption. The hero was supposed to be gone for 10 years, but 3 years later I received a message from my hero, I probably should not have busted out in laughter… but I did:

MASSIVE CHALICE does not allow the lighting of candles just yet and I after this message I never heard from my hero again. These events happen somewhat often and they always give you multiple choices for them. For some odd reason though I am always losing. I was building a stadium for my heroes and the one coordinating it had a loose girder fall on them, they died and the work was canceled. THANKS MASSIVE CHALICE! I am not sure if MASSIVE CHALICE is designed to play against  everyone or if I am just EXTREMELY unlucky, but every choice I have picked so far in MASSIVE CHALICE  has led to some sort of disaster. So far my luck in MASSIVE CHALICE is nonexistent.

MASSIVE CHALICE also features a very interesting art style, which the project lead, Brad Muir, described the map as “…abstract, simplified, and stylized!” I can’t agree more with this statement. The graphics are very interesting in MASSIVE CHALICE, the design of the banners (Thanks to funders) are diverse, ranging from awesome to humorous, and overall the design of MASSIVE CHALICE is very unique. The maps and enemy design are as well, while they simplistic they are still very interesting to see. You can’t really customize your heroes, but you can mate them. Yes, this is XXXcom! Sadly you can’t see the dirty deed done(Joking), but you practically arrange it by building Keeps and forcing two heroes to marry each other. You have to aim for a high fertility rate, which brings some odd compromises. For instance, the only person fit for this 60 year old man was a 16 year old girl. Hm… not sure what Double Fine is trying to make me do, but that old man did not know any woman. Although your moral standpoint on this whole issue may cost you the war against the Cadence, as no babies = less heroes to fight in your battles.

As far as classes go, MASSIVE CHALICE is somewhat lacking with only 3 classes. Every class has a purpose though. The Alchemists have their flasks, which are thrown at enemies to do a small AoE that deals a decent amount of damage. The Hunter is somewhat straightforward, they can move in stealth and can fight from a far or up close. The Caberjack is probably something you have never heard of, but the hero is an up close quarters type with what is essentially a battering ram. The heroes all have their uses, but with only 3 classes it feels like the combinations are somewhat limited. Luckily though, MASSIVE CHALICE is only in Early Access and can change this. I am not sure if Double fine plans on bringing in more classes to MASSIVE CHALICE though.

While I am currently loving my time with MASSIVE CHALICE , it isn’t without its issues. One of these issues being something I have seen in Xcom. One of my Hunter’s missed a 100% shot 3 times in a row! While Brad Muir said “Missing shots always sucks, but there’s a good reason why you might miss a 100% shot. We have a Personality trait called “Optimistic.” If your hero is Optimistic they will report a higher-than-actual hit percentage to you! Liars! So you have to try to keep those in mind as you play. We also have the opposite of that – Pessimistic, where the hero will report a lower-than-actual hit percentage. ” I can’t confirm if this was the issue or not, but I can say that it is very frustrating regardless. I have also had the issue where an arrow goes directly through them and then says “missed!” again, frustrating. I have yelled out in frustration during my time with MASSIVE CHALICE several times. The classes and some of the enemies could sue balancing as well. The Hunter seems to be the best class and is the primary hero on your mission, while the alchemist is usually the one left out due to their flasks being somewhat weak. The Bulwark could use a change as well, as at the advanced stage, they are the hardest enemy to kill and there are usually more than enough on the battlefield.

MASSIVE CHALICE also offers some interesting tactics on and off the field. As I mentioned before, you can mate your heroes together. While some times your matchmaking options will be limited, it needs to happen. So, MASSIVE CHALICE doesn’t just offer a look inside the life of an immortal ruler, but you also get to play as a matchmaker. It is a crucial part of the game, as no babies = no heroes. You need to fill your roster with these young heroes, at the age of 15 they are ready for war, so that you prevent having an elderly squad of heroes. This happened to me in my first playthough on MASSIVE CHALICE sadly. I called them the Geezer Squad and they were the deadliest heroes in MASSIVE CHALICE!

While you are immortal in MASSIVE CHALICE, your heroes aren’t and the game goes by fairly quickly, with years flying by in a matter of seconds. So, don’t get too attached to any hero, as they will be long gone before the game is at an end. The bloodlines aren’t the only thing off of the battlefield you will need to worry about. You will also need to build a Crucible and Sagewright’s Guild. The Crucible gives you heroes experience on a daily basis, but you will need to put a high level hero as the standard to get more experience daily. The Sagewright’s look for brain over brawn and require more intuition, higher level seems to be better as well and allows for 3 Sagewrights in every guild. These positions are not taken lightly either in MASSIVE CHALICE, as once you place a hero in to these guilds the only way out is death. While they will help defend that area from the Cadence, they will not be allowed to battle otherwise or mate.

Christopher is a Contributor at Load The Game and a Community Manager for Project Extract. If he isn't writing about games or playing games, then he's more than likely thinking about, you guessed it, games. Christopher prefers RPGs over all, but isn't opposed to jumping in to just about anything.
@Reaperchris13
Previous Dragon Quest III Now Available on iOS and Android in English
Next Persona 5 English Trailer Released