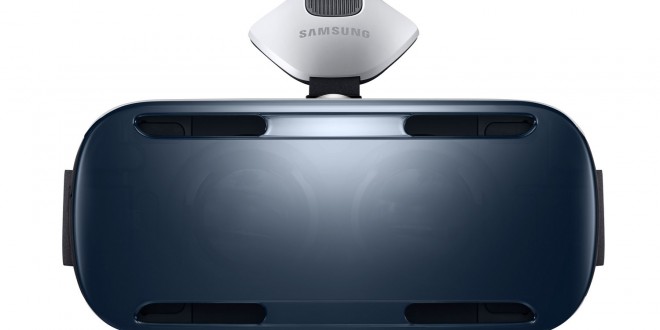 Gear VR, Samsung’s new virtual reality headset tailor-made for the Galaxy Note 4 is finally available for purchase online. The Gear VR price is just $200, which seems like a great deal for a VR headset, but you need to consider the fact that you do need to have a Galaxy Note 4 handset lying around in order to take advantage of the Gear VR features. Samsung is dubbing the new headset the Gear VR Innovator Edition and it should work similarly to Google Glass Explorer Edition.

Wait what? Yes, Gear VR Innovator Edition is still not a completely perfected product and Samsung has made it clear that those who decide to purchase the Gear VR will be buying a VR headset that is designated for developers and early adopters or technology. While Google Glass didn’t turn out so well, the things we’ve seen the Gear VR do at IFA Berlin 2014 were quite impressive, so the device should be worth the money in case you plan on getting a Galaxy Note 4 or already have one handy.

Gear VR is the first virtual reality headset to be launched as a product targeted at the average consumer and early adopters of technology. You should know that Gear VR apps are free at launch, but a store should be coming soon. Nick DiCarlo, VP/GM of immersive and VR products and Samsung told Engadget that the Gear VR app store would be ready to go early in 2015, which is not that far away.  A handful of new apps were launched alongside the Gear VR:

Samsung has also issued a warning for those who would like to purchase the Gear VR, listing a multitude of adverse effects and guidelines. You should only play for abouthalf an hour and take regular breaks of at least 10 minutes between sessions. According to Samsung, Gear VR shouldn’t be used by children under the age of 13 at all, and older kids should be supervised by an adult. “Seizures, loss of awareness, eye strain, eye or muscle twitching, involuntary movements, altered, blurred, or double vision or other visual abnormalities, dizziness, disorientation, impaired balance, impaired hand-eye coordination, excessive sweating, increased salivation, nausea, light-headedness, discomfort or pain in the head or eyes, drowsiness, fatigue, or any symptoms similar to motion sickness” are possible side-effects of using Gear VR, according to Samsung. The company also warns people that these effects can persist even hours after one had already put their Gear VR headset down.

Gear VR has a huge set of rules those who want to buy the headset need to read before they complete and check out their orders, and you should definitely read it in full, because some things about the Gear VR are actually terrifying. Also, users should know that strapping the Galaxy Note 4 into the Gear VR headset causes the phone to overheat and have performance and battery life issues with prolonged use. Those should not persist though, according to Samsung. In any case, read the warnings and make an educated purchase.

The current goal of the Gear VR and its development is to further its evolution and create new apps and environments for future consumers of the product. Since VR is still not a mainstream practice and many people still don’t know that advancements in the field have been made, the purpose of Gear VR is to raise awareness and improve the product based on customer feedback. While you might be able to find a lot of VR headsets which are more complex or more expensive out there, Gear VR is a promising device and we hope Samsung decides to open it up more in the future. For example, it would be nice if Gear VR compatibility would extend to all above 5 inch Android smartphones. We will have to wait and see. Galaxy Note 4 owners, do you think you’ll be buying the Gear VR? You can buy Gear VR here, if you decide to do so.

My life-long dream has been to test out every gadget on the market! Considering the fact that I've rapidly destroyed almost every gadget I've had so far, I'm not inclined to owning something, so my ideal outcome would be to have a different gadget each month. I'm really into smartphones, wearables and tablets and I love Playstation and Xbox, I'm sure I'll beat you at your own game (after a month of training... or two)
Previous Civilization: Beyond Earth gets its first official patch
Next The Last of Us DLC Detailed

In a very short span of time, the internet has vastly changed how we live ...