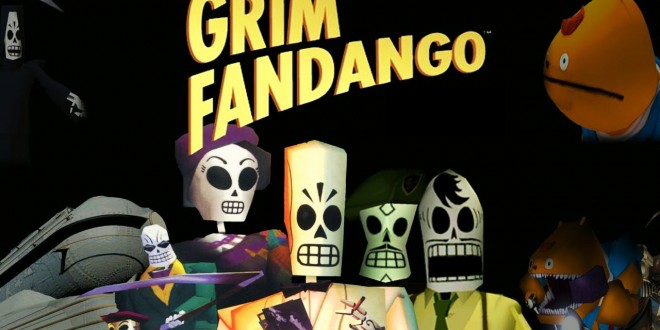 Grim Fandango Remastered is the upcoming remake of the PC classic. At the PlayStation Experience, a release date for the title was finally revealed.

During this year’s PlayStation Experience event, it was announced that the upcoming title Grim Fandango Remastered will be released on January 27th. A trailer for the game was released, which can be seen below. The game will be available for the PlayStation 4, PS Vita, and PC. The remake of Grim Fandango was first revealed during Sony’s E3 presentation. Studio Double Fine demonstrated the title at IndieCade 2014; new features to the game included higher-resolution background textures, improved resolution for character models, and real-time lighting models. Players are also able to switch back and forth between the new presentation and the original graphics from the original version of the game. Grim Fandango Remastered will also feature a remastered version of the soundtrack, fully orchestrated through performances of the Melbourne Symphony Orchestra.

Orginally released in 1998, Grim Fandango was critically acclaimed by reviewers. The game was considered to be one of the best games of that year. Despite the game’s acclaim, Grim Fandango was considered a commercial failure, which helped lead to the decline of the adventure game genre. The game combines elements of the Aztec belief of the afterlife along with film noir, such as the Casablanca, to create the Land of the Dead. It is through here that recently departed souls must travel before they reach their final destination: the Ninth Underworld. The plot follows travel agent Manuel “Manny” Calavera, who is trying to save Mercedes “Meche” Colomar, a newly arrived virtuous soul, during her long journey. Players control Manny as he collects objects to interact with the world around him in order to solve puzzles.

I’m Load The Game’s co-founder and community manager, and whenever I’m not answering questions on social media platforms, I spend my time digging up the latest news and rumors and writing them up. That’s not to say I’m all work and no fun, not at all. If my spare time allows it, I like to engage in some good old fashioned online carnage. If it’s an MMO with swords and lots of PvP, I’m most likely in it. Oh, and if you’re looking to pick a fight in Tekken or Mortal Kombat, I’ll be more than happy to assist! Connect with me by email markjudge (@) loadthegame.com only
@@MarkJudgeLTG
Previous The Legend of Zelda Wii U First Look Gameplay
Next Tekken 7 Trailer Reveals New Character: Lucky Chloe

MASSIVE CHALICE is a tactical strategy PC game on an epic fantasy timeline from the ...