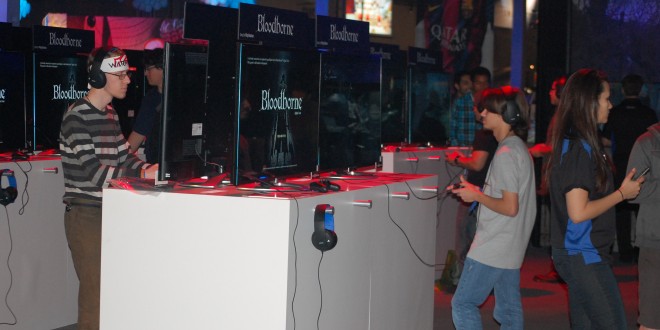 The Chalice Dungeon in Bloodborne was revealed at this weekend’s PlayStation Experience Convention in Las Vegas, Nevada. Fans of Bloodborne know that it is a spiritual successor to the popular Souls series which consists of: Demon’s Souls, Dark Souls and Dark Souls II. originally a PlayStation exclusive with Demon’s Souls, From Software released Dark Souls and Dark Souls II on multiple platforms. Now with Bloodborne Sony has brought From Software back to the PlayStation as an exclusive to the PlayStation 4. Bloodborne keeps the same aesthetic of the Souls series, with a very dark, tortured world. The time setting is different this go around, with a Victorian theme instead of the dark age fantasy of the first trilogy.

The Chalice Dungeon is a procedurally generated dungeon, allowing players to endlessly enjoy taking on new areas to fight in and explore. The dungeon can be started with both a black and white knight running around along with yourself. Traps are spread throughout the dungeon, and will open up new paths for you to travel along, sometimes wielding access to shortcuts to the end boss. Activation points are also available and are a less deadly option for progressing. Each will be three layers and sometimes smaller bosses will appear. The gameplay demo at the PlayStation Experience showcased a fiery guard dog much larger than the two players. No HUD was shown and the players took a lot of damage with no death leading me to believe that it was either staged or god mode was engaged. They close out the Chalice Dungeon before the boss is beaten, and game director Miyazaki said he wanted players to see it for themselves upon the games release.

Chalice Dungeon is a new feature to the Souls series, with no previous game having procedurally generated maps. The dungeon won’t be entirely randomized, since procedural content follows a set of rules, but allows for variation within those rules. Bloodborne will be out for PlayStation 4 on February 6, 2015.