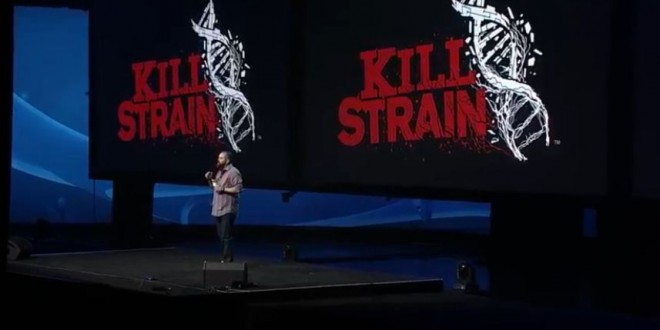 Kill Strain is one of the many games shown off at the PlayStation Experience this past weekend. The game is currently in pre-alpha and people who attended the convention were able to play it provide feedback. Sony San Diego announced Kill Strain while taking the stage. Sony San Diego did not say much about the game, but they did mention a closed beta coming in 2015. Right now you can sign up on Kill Strain’s website for a chance to play in the beta when it launches. While Sony San Diego didn’t say much about the game during the presentation, they did allow people at the convention to play a pre-alpha build of Kill Strain.

People at the convention compared it to MOBA blended with a twin stick shooter. Apparently though, Kill Strain was originally supposed to be a zombie game. While not much is known about the game, Kill Strain is a Free to Play action adventure game for the PS4. It has an online mode with an interesting structure of 5v2v5. A very interesting structure, as 2 teams of 5 humans gather resources and obtain kills, while the team of 2 mutants tries to stop them. Once you are killed by a mutant, you become one and can not go back to the human side.

Kill Strain is a very interesting concept and I hope I can get in to the beta! Although I am sure millions have already signed up just to test the game. News on Kill Strain should arrive in the upcoming months as well. Sony San Diego is the studio behind MLB: The Show and many other sports games. This is the first time thy will straying away from sports and in to action in a long time. While not much is known about Kill Strain, you can sign up for the beta and hope for the best!

Christopher is a Contributor at Load The Game and a Community Manager for Project Extract. If he isn't writing about games or playing games, then he's more than likely thinking about, you guessed it, games. Christopher prefers RPGs over all, but isn't opposed to jumping in to just about anything.
@Reaperchris13
Previous The Banner Saga 2 Arriving on PS4, Xbox One, and PC in 2015
Next PlayStation Experience Photos