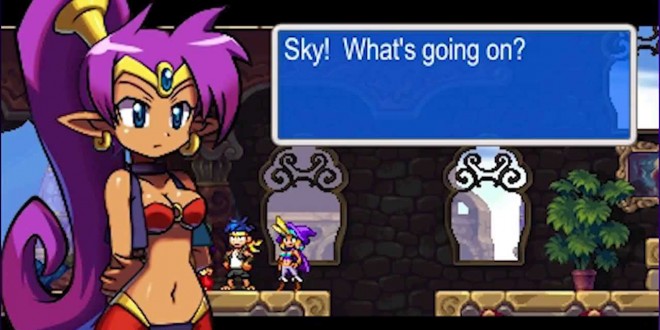 Shantae and the Pirate’s Curse is being ported over to the Wii U. And it might be coming very soon.

A trailer for the Wii U version of Shantae and the Pirate’s Curse was released, which can be seen below. Along with the trailer, WayForward let out a Tweet that mentioned a possible 2014 release.The third entry in the series, Shantae and the Pirate’s Curse is a 2D platformer. After the events of the second game, Shantae: Risky’s Revenge, Shantae is adjusting to a life without her powers. One day, she is approached by her nemesis, Risky Boots, who tells her that the evil Pirate Master is preparing to return. Despite not having powers, Shantae forms an alliance with Risky Boots to stop the Pirate Master’s revival.

In Pirate’s Curse, Shantae must now rely on pirate gear to traverse as she has lost her powers. Items include pistols, scimitars, and cannons. Many of these items have multiple uses. The Genie lamp can gather dark magic, or grab items that are out of reach. Pirate Gear can be upgraded to make it more useful. Sequin Land will feature new and old locations in Pirate’s Curse. The game is said to be twice as large as the previous entry, with new areas to traverse, such as the heavens and the underworld. The map system has been changed to a more Metroid-style map system, and will feature hidden paths. Pirate’s Curse released on the 3DS to critical acclaim. The game was first revealed in the November 2012 issue of Nintendo Power. The Wii U version was revealed just before Nintendo’s E3 2014 presentation through the Nintendo Life online news outlet.

Shantae and the Pirate’s Curse is available now on the 3DS. A Wii U port is on the way. A sequel titled Shantae: Half-Genie Hero is in development.

I’m Load The Game’s co-founder and community manager, and whenever I’m not answering questions on social media platforms, I spend my time digging up the latest news and rumors and writing them up. That’s not to say I’m all work and no fun, not at all. If my spare time allows it, I like to engage in some good old fashioned online carnage. If it’s an MMO with swords and lots of PvP, I’m most likely in it. Oh, and if you’re looking to pick a fight in Tekken or Mortal Kombat, I’ll be more than happy to assist! Connect with me by email markjudge (@) loadthegame.com only
@@MarkJudgeLTG
Previous Zen Pinball 2 Receives Venom Based Table
Next Tomb Raider Will Be Published By Microsoft