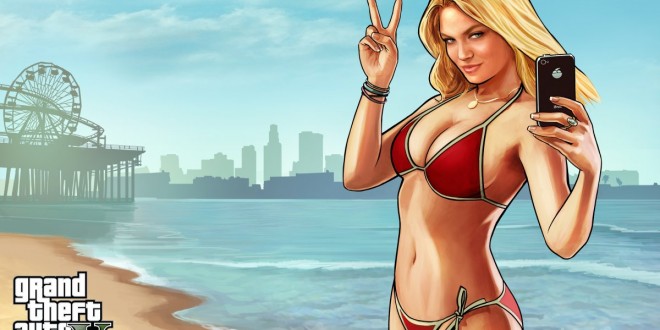 GTA V has been under a ton of heat lately. Take-Two’s latest game has been removed from Kmart and Target in Australia. With a good amount of controversy shrouding one of Take-Two’s largest franchises, the CEO has taken action. In a statement during a digital media conference. Take-Two chairman and CEO, Karl Slatoff, offered an elegant solution to people complaining about GTA V. During the Take-Two conference, Karl Slatoff stated that if you don’t like GTA V, you actually don’t have to buy it! It is a very surprising statement actually, Gamesindustry has the full quote:

“It’s one thing for someone to not want to buy a piece of content, which is completely understandable. And that’s really the solution. If you don’t like it and it’s offensive to you, then you don’t buy it. But for a person or a group of people to try to make that decision for millions of people…

We have 34 million people who bought Grand Theft Auto, and if these folks had their way, none of those people would be able to buy Grand Theft Auto. And that really just flies in the face of everything that free society is based on. It’s the freedom of expression, and to try to squelch that is a dangerous and slippery slope to go down.

So it’s really more disappointing for us in that regard than it is in the context of our business. Our business is going to be completely unaffected by this; it doesn’t make a difference to us. At the end of the day though, it’s not something you want because it’s a poor leadership decision.”

Very interesting indeed, but Take-Two makes a perfectly good point. It is simple, fi you do not want children playing the game, do not buy it for them. If you do not want to take part of Take-Two’s franchise, don’t buy it. The only people truly effected by Kmart and Target Australia’s decision are legitimate customers. They have not only lost a sale, but they have not gained  one either. By removing Take-Two’s product all they have done is dug a hole for themselves. Gamer’s can’t buy Take-Two’s wildly popular game? Well, that won’t prevent them from purchasing the game. It will prevent Kmart and Target from making money off of them and they have more than likely lost a customer.

Kmart and Target Australia removed Take-Two’s GTA V earlier this month due to a biased petition that was blatantly lying. The only people hurt by these are the stores, as Take-Two’s GTA V is selling extremely well and with the Holiday season here, it should only sell more.

Christopher is a Contributor at Load The Game and a Community Manager for Project Extract. If he isn't writing about games or playing games, then he's more than likely thinking about, you guessed it, games. Christopher prefers RPGs over all, but isn't opposed to jumping in to just about anything.
@Reaperchris13
Previous Dying Light Intro Revealed
Next Final Fantasy XIV: A Realm Reborn to Get Patch 2.45