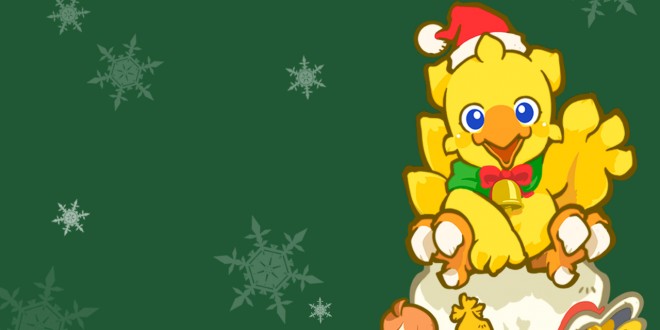 Final Fantasy has always had memorable soundtracks in all of their games. Now Scarlet Moon Records has taken a few of these tracks and remixed them for the holidays.

Scarlet Moon Records has put together a five track EP featuring various Final Fantasy songs, a track from Saturday Morning RPG, and a bonus track from Dragon Fantasy Book II composer Dale North. Other composers on the EP include Scarlet Moon Production’s Jayson Napolitano, Goomin Nam of the DJMAX series, and Vince DiCola, who worked on the 1986’s Transformers: The Movie. The Final Fantasy games that are featured on the album are Final Fantasy IV, VIII, and XI.

The music of Final Fantasy has been primarily composed by musician Nobuo Uematsu. He composed the series’ music until he left Square Enix in 2004. Other composers for the series include Masashi Hamauzu, Hitoshi Sakimoto, and Junya Nakano. Uematsu was given little direction when creating the music of Final Fantasy, though the production staff would request pieces that would fit certain situations. Uematsu would start with a game’s theme, and compose the rest of the soundtrack to fit that theme. When creating character themes, Uematsu would read the game’s scenario to determine the character’s personality.

While the themes of the soundtracks for various Final Fantasy titles do change, the series does have recognizable pieces that appear in most of the titles. Most games feature the piece named “Prelude,” which has become well known amongst fans. One of the most popular pieces in the series is the Victory Fanfare, which has become known amongst gamers throughout the years, even with gamers who know little about the series. Other pieces that have become known are the Chocobo themes, and “Prologue,” which is often played during a game’s ending credits.

Final Fantasy fans can pick up the album from Loudr for $5 right here.

I’m Load The Game’s co-founder and community manager, and whenever I’m not answering questions on social media platforms, I spend my time digging up the latest news and rumors and writing them up. That’s not to say I’m all work and no fun, not at all. If my spare time allows it, I like to engage in some good old fashioned online carnage. If it’s an MMO with swords and lots of PvP, I’m most likely in it. Oh, and if you’re looking to pick a fight in Tekken or Mortal Kombat, I’ll be more than happy to assist! Connect with me by email markjudge (@) loadthegame.com only
@@MarkJudgeLTG
Previous Shovel Knight On the Way for PS3, PS4, and PS Vita
Next Best 5 Android smartphones for Christmas