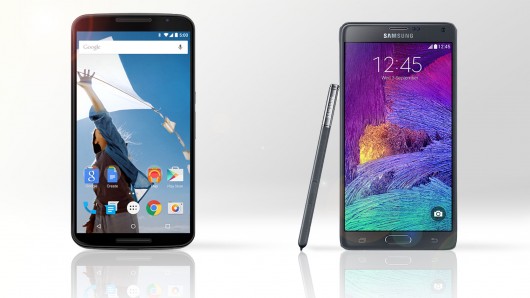 Is it just me, or are smartphones getting bigger and bigger with each passing year? It seems like 5.5-inch displays are quickly becoming the norm for many of the new flagships and if that wasn’t big enough, there are a few devices which pack even larger screens. One of these devices is the highly acclaimed Samsung Galaxy Note 4, the latest ‘phablet’ released by the Korean tech giant. Smartphones usually don’t get much bigger than this, but as fate would have it, Motorola decided to launch an even bigger one last month in the form of the Nexus 6. If you’re into huge and powerful mobile devices, any of these two would make a great addition to your pocket, but if you could only choose one, which would it be?

The Nexus 6 is the latest in a long line of great bang for the buck smartphones, which also includes the ridiculously popular LG Nexus 5. That said, this year’s flagship strayed quite a bit from the original formula as the price tag is no longer what many would call affordable. The increase in price comes as a direct result of the device’s massive size and impressive specs. The Motorola Nexus 6 is for all intends and purposes a premium flagship smartphone. From a visual standpoint, the device looks very similar to the second generation Moto X (2014), which is definitely not surprising considering that both of them have been designed by Motorola. There is a very noticeable difference between the two however and it becomes obvious the second you first lay your eyes on the Nexus 6. Coming in at no fewer than 5.96-inches, the display on this device is truly a sight to behold. The AMOLED screen offers 1440 x 2560 resolution, 493 pixel density, and Corning Gorilla Glass 3 protection.

While the phone looks very good from the outside, a true flagship also needs some powerful specs and this phone definitely has plenty of those. A quick peak under the hood reveals a Qualcomm Snapdragon 805 chipset complete with quad-core processor clocked at 2.7 GHz, Adreno 420 GPU, and 3 GB of RAM. Speaking of memory, the Motorola Nexus 6 only comes in 32 GB and 64 GB storage options and there is no microSD card slot available. That’s definitely a disadvantage over some of the other flagships out there, but there is still a decent amount of storage memory available nevertheless. Rounding up the specs, we have a 13 MP primary camera with optical image stabilization along with a 2 MP front-facing unit, and a 3,220 mAh battery.

Chances are that you already know quite a bit about this device, but I’ll fill you in real quick just in case you don’t. The Samsung Galaxy Note 4 is widely considered to be one of the absolute best smartphones of the year, and with good reason. The fourth generation phablet offers a premium design that was improved substantially since the last iteration. It’s not surprising that Samsung is charging quite a pretty penny for the device, although it’s definitely well worth it if you ask me. The display is very similar to that of the Nexus 6, albeit just a bit smaller. The Samsung Galaxy Note 4 comes equipped with a Super AMOLED 5.7-inch screen complete with 1440 x 2560 resolution, 515 ppi, and the new Corning Gorilla Glass 4 protection.

Hardware-wise, we’re again looking at a Qualcomm Snapdragon 805 processor running at 2.7 GHz, with Adreno 420 GPU, and 3 GB of RAM. We can already see plenty of similarities between the Samsung Galaxy Note 4 and the Nexus 6, but there are certainly a few differences as well. The phablet only comes with 32 GB of storage on board and there are no other versions that can offer more memory. However, the device does feature a microSD card slot which allows for up to 128 GB of additional storage. As for the cameras, the Samsung Galaxy Note 4 sports a 16 MP shooter with OIS on the back, complemented by a 3.7 MP front-facing snapper. Samsung’s latest premium offering is also powered by a 3,220 mAh battery and comes with the additional benefit of the already infamous S Pen stylus.

Now back to the original question. If you would have to choose between the Motorola Nexus 6 and the Samsung Galaxy Note 4, which one would you choose? We need to take into consideration two additional aspects here (aside from what was already discussed) in order to properly answer that question, one of which is software. The Nexus 6 runs on the latest Android Lollipop update and is certain to get all upcoming updates in due time as soon as they are released. The Samsung Galaxy Note 4 is rumored to also receive Android Lollipop later this month, but it’s very likely that the new operating system will not reach all users until January at the earliest. Last but not least, let’s talk actual pricing. There is quite a big difference when it comes to the price, with the Nexus 6 setting you back about $600-$650 while the Samsung Galaxy Note 4 will have you forking out $800-$850. All in all, the Samsung Galaxy Note 4 seems like the better choice, but the price is definitely quite a bit bigger, so you might wanna check your budget and see if you can afford it. Otherwise, the Nexus 6 is also a very solid device and well worth the money. As always, the final decision is up to you.

I’m Load The Game’s co-founder and community manager, and whenever I’m not answering questions on social media platforms, I spend my time digging up the latest news and rumors and writing them up. That’s not to say I’m all work and no fun, not at all. If my spare time allows it, I like to engage in some good old fashioned online carnage. If it’s an MMO with swords and lots of PvP, I’m most likely in it. Oh, and if you’re looking to pick a fight in Tekken or Mortal Kombat, I’ll be more than happy to assist! Connect with me by email markjudge (@) loadthegame.com only
@@MarkJudgeLTG
Previous Retro City Rampage Will Never be on Wii U
Next Top 10 Software Deals of the Week (12.13.14)