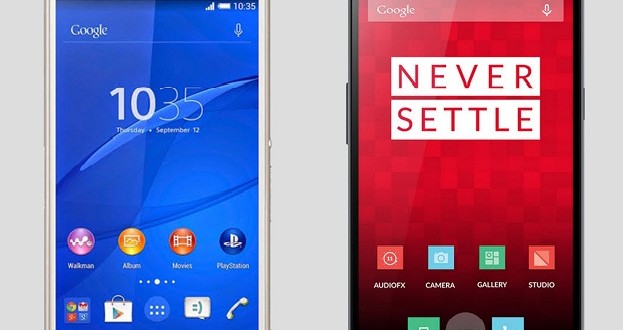 Chinese manufacturer OnePlus surprised all of us this year with a smartphone that seemed too good to be true when it was first announced. The device in question goes by the name of OnePlus One, although some of you may also know it as the 2014 “flagship killer.” The powerful, yet affordable smartphone was true to its name as it got people more excited than many other flagships this year. But can the OnePlus One also kill some of the newly released flagships, like let’s say, the highly praised Sony Xperia Z3? The only way to find out would be to pit the two devices against each other in order to find out what each of them can bring to the table.

You’ll be hard pressed to find a smartphone that offers a better bang for the buck than the OnePlus One. Not only is this handset ridiculously cheap, but it also features a set of specs that can put would-be competitors to shame. The device comes equipped with a 5.5-inch display with 1080 x 1920 resolution, which amounts to a grand total of 401 pixels per inch. Hardware-wise, we’re looking at a powerful Qualcomm Snapdragon 801 chipset complete with quad-core 2.5 GHz  CPU, Adreno 330 GPU, and 3 GB of RAM. The OnePlus One also offers a 13 MP primary camera, a 5 MP secondary selfie shooter, 16 GB/64 GB storage options, a 3100 mAh battery, and the Android 4.4 KitKat-based CyanogenMod 11S. And now for the best part. The OnePlus One only costs 300 US dollars for the 16 GB model, or 350 bucks for the 64 GB variant.

The third iteration in Sony’s Xperia Z series didn’t come with a lot of improvements compared to its predecessor, but that’s not very surprising considering that the Xperia Z2 was already very good to begin with. Released in late September, the Sony Xperia Z3 features an improved water and dust resistance IP68 rating, as well as Sony’s own Triluminous display technology. As for the screen itself, we’re looking at a 5.2-inch panel with 1080 x 1920 resolution and 424 pixel density. A quick peak under the hood reveals a Qualcomm Snapdragon 801 quad-core processor clocked at 2.5 GHz with Adreno 330 GPU, and 3 GB of RAM. A main selling point of the Sony Xperia Z3 is the already infamous 20.7 MP primary camera, although the 16GB/32GB storage options with microSD support (up to 128GB), and the 3100 mAh battery with increased endurance are nothing to sneeze at either. The Sony Xperia Z3 currently runs on the Android 4.4.4 KitKat operating system and is planned to received the Android Lollipop update soon. Pricing revolves around 700-800 US dollars.

The Sony Xperia Z3 looks a bit more solid than the OnePlus One all things considered, but it also costs more than double, which puts us in a very difficult spot. If money is not an issue at all, then Sony’s offering would definitely be the better choice here as it has more to offer both in terms of hardware, and software. On the other hand, there’s a reason why the OnePlus One is being dubbed “flagship killer.” Although its price is more akin to mid-range smartphones, the hardware is certainly not. The only real problem with this device is the invite system, although OnePlus One is constantly looking at ways to improve it, so you may have an easier time getting your hands on it now. All in all, my vote goes to the Sony Xperia Z3, but I would have to agree that the OnePlus One seems much more appealing thanks to its low price tag. The final decision, as always, is entirely up to you.

I’m Load The Game’s co-founder and community manager, and whenever I’m not answering questions on social media platforms, I spend my time digging up the latest news and rumors and writing them up. That’s not to say I’m all work and no fun, not at all. If my spare time allows it, I like to engage in some good old fashioned online carnage. If it’s an MMO with swords and lots of PvP, I’m most likely in it. Oh, and if you’re looking to pick a fight in Tekken or Mortal Kombat, I’ll be more than happy to assist! Connect with me by email markjudge (@) loadthegame.com only
@@MarkJudgeLTG
Previous Microsoft Lumia 535 vs Samsung Galaxy Grand Prime – Specs and price comparison
Next Destiny Players Banned for Modded Consoles