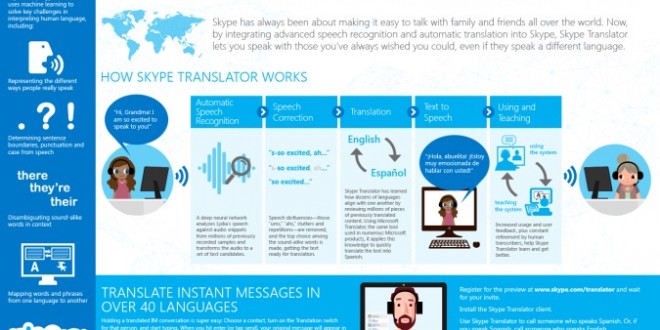 The Skype Translator, which was originally revealed back in May has now entered the first testing phase according to Microsoft. The app is currently only available for Windows 8.1 users and those who are testing the Windows 10 technical preview. This ambitious project aims to offer real-time translation between various languages both while chatting and while speaking. At the moment Skype Translator only supports English and Spanish spoken languages, but many more will be on the way soon. If you want to use the app just for chatting however, you’re in luck because it’s already able to support more than 40 instant-messaging languages.

Microsoft said in a statement that this is just the first step of a journey that will revolutionize the way we communicate with people from other countries. The main goal of Skype Translator is to provide voice translation for “as many languages as possible on as many platforms as possible” according to the company. As for how the software actually works, Skype shared some of the technical details in a recent blog post. “Skype Translator’s machine learning protocols train and optimize speech recognition (SR) and automatic machine translation (MT) tasks, acting as the glue that holds these elements together. This “glue” transforms the recognized text to facilitate translation. This process includes the removal of disfluencies (i.e. ‘ahs’ and ‘umms’ as well as re-phrasings), division of the text into sentences, as well as addition of punctuation and capitalization,” the company said.

That’s just a short summary as the whole process is quite complex. You can read the lengthy blog post here. In short, Skype Translator is similar to Google Translate in a way, although the technology used by Microsoft seems to be a bit more solid. It’s no secret that Google Translate is not exactly the most reliable service out there, so let’s hope that Skype Translator will be able to offer something better. The fact that it offers real-time translation while voice chatting is definitely very interesting and may in fact be able to revolutionize the way we communicate if done right. Only time will tell if Skype Translator can actually become useful but it does sound quite promising in theory.

I’m Load The Game’s co-founder and community manager, and whenever I’m not answering questions on social media platforms, I spend my time digging up the latest news and rumors and writing them up. That’s not to say I’m all work and no fun, not at all. If my spare time allows it, I like to engage in some good old fashioned online carnage. If it’s an MMO with swords and lots of PvP, I’m most likely in it. Oh, and if you’re looking to pick a fight in Tekken or Mortal Kombat, I’ll be more than happy to assist! Connect with me by email markjudge (@) loadthegame.com only
@@MarkJudgeLTG
Previous Mass Effect 4 announcement inbound as Bioware is “pushing hard before the holidays”
Next CyanogenMod 12 brings Lollipop treatment to Android phones: screenshots