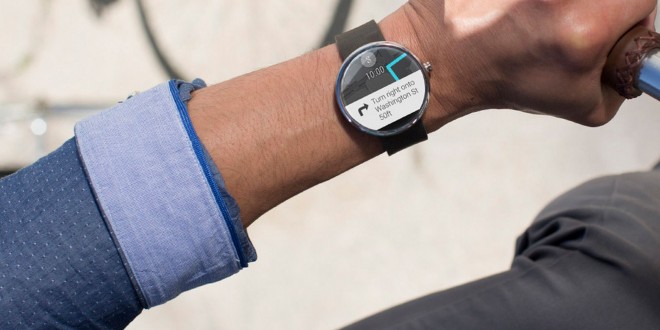 The Moto 360 update that has been announced yesterday brings the brand new Android 5.0 Lollipop feeling to Android Wear, for all Material Design loving fans out there to rejoice. The Moto 360 is currently the most popular Android Wear device, but with the new Moto 360 update, the pull should become even more powerful, since the Lollipop treatment and Material Design are getting more and more popular each day.

The Moto 360 update proves that Google and Motorola are working closely together to bring the wearable to the front lines of the market. The Moto 360 is one of the most appreciated and one of the best smartwatches out there. Its round watch face made a statement when it was first demoed in Spring 2015, but since then it has become as overhyped as possible. The Moto 360 update improves performance and ports a lot of the design elements of Android 5.0 Lollipop we’ve seen on the Nexus 6 or other Google Play Edition devices. Material Design shall dominate the watch thanks to the Moto 360 update and comes as a welcome design overhaul we’ve been craving for ever since we first laid eyes on Google’s brand new mobile operating system.

Besides the Moto 360 update, there are some more news and rumors being circulated around the internet talking about a Moto 360 2 release next year, which should bring a new wearable from Motorola that might do away with the black bar at the bottom and the battery draining issues. While we don’t have much information about the Moto 360 2, at least we’re content that the Moto 360 update has refreshed one of our favorite wearable devices.

The Coral release of the Android Wear OS is the code-name for the Moto 360 update and it bumps the version number up to 5.0.1. Please note that once you’ve installed the update, you can’t downgrade to a previous version of the OS. The full changelog for the Moto 360 update includes Android L, third party watch faces, an undo button for card dismissal, quick settings tweaks, a theater mode and revamped battery and storage stats. The Moto 360 update should have completed its rollout by now, so let us know how you are liking the new UI and features!

My life-long dream has been to test out every gadget on the market! Considering the fact that I've rapidly destroyed almost every gadget I've had so far, I'm not inclined to owning something, so my ideal outcome would be to have a different gadget each month. I'm really into smartphones, wearables and tablets and I love Playstation and Xbox, I'm sure I'll beat you at your own game (after a month of training... or two)
Previous Ryse: The Cancelled First Person Brawler
Next Netflix for Android Wear now lets you use your watch as a remote control