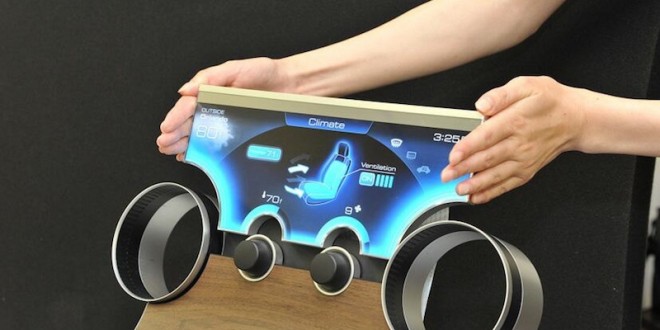 The Sharp Free-Form Display Technology has been announced and presented in June 2014 and the new LCD tech allows for the creation of unconventionally-shaped displays that can be used in various upcoming technology. According to recent rumors, Nintendo, who has been collaborating with Sharp on the 3DS, should be the first company to employ the Sharp Free-Form Display in its upcoming hardware products. Since Nintendo is planning a new sleep monitoring device and supposedly a new console, the Sharp Free-Form Technology LCD panels could bring a whole new touch to the upcoming products.

Nintendo and Sharp have already collaborated on the display of the 3DS which was released in 2011 and rumor has it that the companies will be teaming up yet again to try out the Sharp Free-Form Display Technology in order to create unique products that will certainly impress any tech enthusiast out there. The Sharp Free-Form Display is being called a revolutionary technology concept and prototypes show displays shaped as car monitors and innovative console displays. The new tech should allow for display design as we’ve never seen before, matching to the hardware it is used in. The Sharp Free-Form Display should be an LCD panel with touchscreen functions that has slim bezels, a light weight and thin body.

The Sharp Free-Form Display technology uses IGZO technology and proprietary circuit design so that the company can mold and design the displays to be fit for a wide range of different hardware products. The tech aims to make the user experience more immersive, personal and specific to the device it is being used in. The company announced in a press release that the Sharp Free-Form Display Technology could be used in motor vehicles, wearable devices, consoles and even new types of TV screens.

Rumor has it that Nintendo will be the first to make use of the fresh technology in an upcoming console or a sleep monitoring device. According to rumors, Nintendo wants to use the Sharp Free-Form Display to create a new console with a donut-hole in its center, supposedly a successor to the 3DS. A new 3DS console would be unexpected, since the original release has just been upgraded, but we could also speculate that Nintendo is thinking about another console upgrade or an entirely new device. A sleep tracking device was teased by the company a few months ago, so that might be a more likely receiver of the new Sharp Free-Form Display Technology. In any case, take these rumors with a grain of salt and wait for an official announcement. No matter what kind of hardware Nintendo is thinking about, coupling that with the Sharp Free-Form Display should be a feast for the eyes.

My life-long dream has been to test out every gadget on the market! Considering the fact that I've rapidly destroyed almost every gadget I've had so far, I'm not inclined to owning something, so my ideal outcome would be to have a different gadget each month. I'm really into smartphones, wearables and tablets and I love Playstation and Xbox, I'm sure I'll beat you at your own game (after a month of training... or two)
Previous Archlord 2 Gains New Expansion and Server
Next OnePlus One is banned in India due to patent infringement