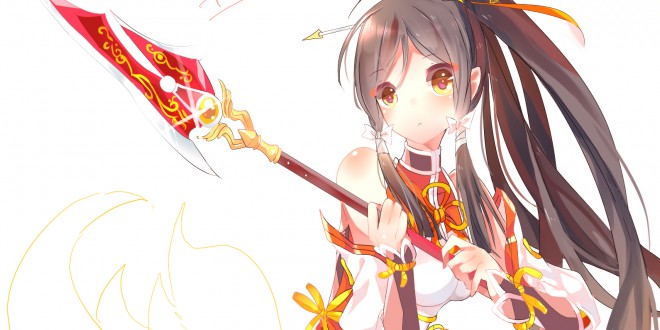 Elsword is an action MMORPG developed by KOG Games. Today, the company announced the launch of a new Job path for the 9-tailed fox character Ara.

In Elsword, Ara Haan has spent every waking moment looking for a way to redeem her demon-possessed brother. Obsessed with her goal, she overlooked the power that has bolstered her immense strength: Eun, the Millennium Fox Spirit. Finding that her clan imprisoned Eun, she also learns that only a member of her clan can break the bond. She finds a way to break the bond, and from within, an amalgamation of Ara’s martial prowess and a dark ethereal ferocity grew, and in that moment, the Dark Fox was born. With her new skills, She became widely known as the Little Specter.

Players in Elsword can unlock a secret skill as Ara. As Little Specter, Ara is dedicated to learning the Exorcism Arts of her ancestors. As a combo, players can combo 3 new, Job specific skills in succession to unlock the Secret Skill. Once executed, Ara jumps and disappears, the quickly reappears above the enemy last struck by Darkness Sever before crashing down on the enemy, setting off a storm of specters damaging all foes in the area.

For a limited time, Elsword players can boost one base-job Ara up to level 35 instantly, though they can only do one character per account. All they have to do is take Ara to the village or a resting area between fields. Players must wait for the message to pop up, then click the Level Boost button. Once they have done that, they will also receive the Level Boost Cube thru the mail.

Elsword is available for the PC. The game features real-time action gameplay and includes both PvP and PvE modes. There are multiple characters to play as, each with unique backstories and skills.

I’m Load The Game’s co-founder and community manager, and whenever I’m not answering questions on social media platforms, I spend my time digging up the latest news and rumors and writing them up. That’s not to say I’m all work and no fun, not at all. If my spare time allows it, I like to engage in some good old fashioned online carnage. If it’s an MMO with swords and lots of PvP, I’m most likely in it. Oh, and if you’re looking to pick a fight in Tekken or Mortal Kombat, I’ll be more than happy to assist! Connect with me by email markjudge (@) loadthegame.com only
@@MarkJudgeLTG
Previous SOE Kicks Off the Holiday Celebration Across its Game Library
Next Clockwork Empires Receives December Update