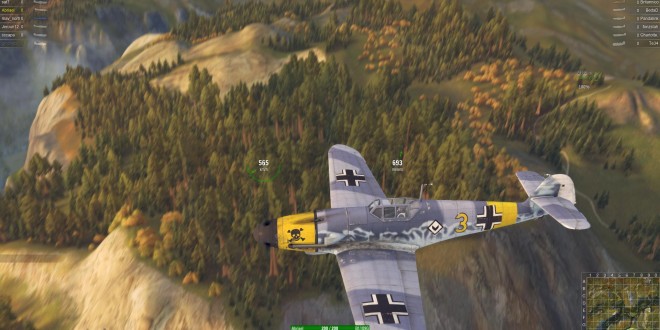 World of Warplanes Invaded by UFOs and Giant Snowmen for Christmas

Just in time for Christmas, World of Warplanes will receive a winter themed game mode to bring players some holiday cheer. In this Christmas themed map, players will be able to pilot UFOs and battle has a giant snowman watches in the distance. The update will come on December 18th, and will be free for players. The mode puts players in the cockpit of alien aircraft and fire snowballs at each other. The map that this battle will take place on is the new Lapland map. Along with the winter themed mode, the update will come with new achievements in 26 new missions. There will also be a new unnamed US aircraft, as well as bug fixes and matchmaking optimizations.

Similar to the MMO title World of Tanks, World of Warplanes puts players in the cockpits of warplanes as they battle in the sky. The game was released late 2013. World of Warplanes features over 100 different planes, all from different countries, such as Germany, America, the Soviet Union, and Japan. The planes come if three different classes: Fighters, Heavy Fighters, and Ground Attack Planes. All planes can be unlocked and upgraded through game progression. The game features 15 vs. 15 PvP combat, with two different modes of play: Training Mode and Standard Battles. Training Mode is aimed at rookies, as they learn the game’s controls while shooting still targets and moving targets through a series of lessons. Standard Battles see players destroying all hostile aircraft as they fight for air superiority. The game is free-to-play, and allows players of World of Warplanes to share accounts with World of Tanks, allowing gamers to share different currencies between games.

I’m Load The Game’s co-founder and community manager, and whenever I’m not answering questions on social media platforms, I spend my time digging up the latest news and rumors and writing them up. That’s not to say I’m all work and no fun, not at all. If my spare time allows it, I like to engage in some good old fashioned online carnage. If it’s an MMO with swords and lots of PvP, I’m most likely in it. Oh, and if you’re looking to pick a fight in Tekken or Mortal Kombat, I’ll be more than happy to assist! Connect with me by email markjudge (@) loadthegame.com only
@@MarkJudgeLTG
Previous Landmark Goes Down Ahead of Massive Update
Next Final Fantasy XIV Holding a Two-Week Free Trial for PS4