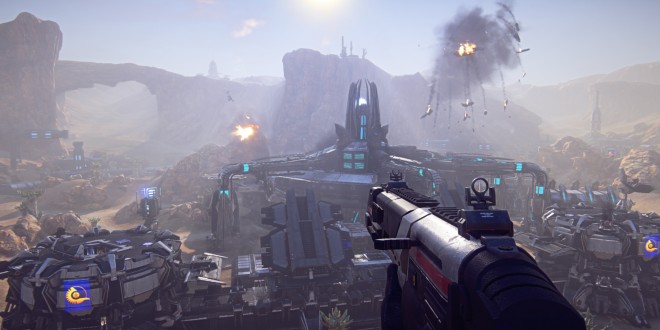 A new PlanetSide 2 update will include auto-turrets

PlanetSide 2 is a MMO first-person shooter published by Sony Online Entertainment. Today, the game will receive an update that will add a number of new features, including the game’s holiday celebration content.

Today, Sony Online Entertainment released an update for PlanetSide 2, which added a few new features, as detailed in the game’s forum. The first is the Spitfire auto-turret. Available to Engineers, the turret will automatically fire at any enemies within 50 meters. Players can now wield their melee weapon, which will activate different properties when wielding as such. Gamers will also be able to customize their Profile and Death Screen with profile banners. Also being added are various balances and the ability to ban players from squads and platoons.

Also being added to the update is the Auraximas update. Snowmen will appear on Esamir, and stone snowmen will appear on all of the other continents. Golden snowmen can also be found on all continents. Snowmen can be shot for experience, with all experience being shared with squad members within 300 meters. PlanetSide 2 players will also receive in-game rewards, such as the “Snowblower” title, cert points, and more. The game’s store will also have holiday items available for purchase. This includes holiday hats that give a 50% experience boost when worn.

Originally released in 2012, PlanetSide 2 is the remake of the original PlanetSide. The game features the same world and factions, and takes place around the same time. The game features territory control in an open-world, with large battles featuring up to 2000 players per continent on foot and in vehicle. The game features several different classes, with every empire having the same classes, though some weapons are empire specific. As players participate in combat, they receive experience, which will raise their battle rank and reward them with certification points. As players receive more certifications, they can unlock new abilities and items.

PlanetSide 2 is available for PC. A PlayStation 4 version of the game will be coming soon.

I’m Load The Game’s co-founder and community manager, and whenever I’m not answering questions on social media platforms, I spend my time digging up the latest news and rumors and writing them up. That’s not to say I’m all work and no fun, not at all. If my spare time allows it, I like to engage in some good old fashioned online carnage. If it’s an MMO with swords and lots of PvP, I’m most likely in it. Oh, and if you’re looking to pick a fight in Tekken or Mortal Kombat, I’ll be more than happy to assist! Connect with me by email markjudge (@) loadthegame.com only
@@MarkJudgeLTG
Previous Allods Online Giving Players Two Free Weeks
Next Devil Survivor 2: Record Breaker Introduces Keita and Hinako

SOE Kicks Off the Holiday Celebration Across its Game Library