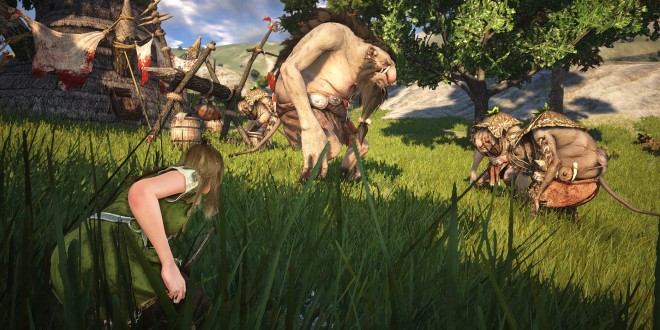 Black Desert's Korean beta kicks off with a new trailer

Black Desert is an upcoming MMORPG from Korean development studio Pearl Abyss. The studio has kicked off an open beta for the title, while also releasing a brand new trailer for the game.

The open beta for Black Desert is online in Korea. Along with the release of the game’s beta, a new trailer has been revealed, which can be seen below. Titled “Tactics Guide,” the trailer shows some of the fast-paced action that players can expect to experience in the game. A few different characters were shown off, along with some of the enemies that players will run into in the game. The trailer also shows some of the other mechanics that gamers can expect. This includes mounted combat, the use of cannons for combat and sieges, setting traps for enemies, and massive battles between rival factions.

Development of Black Desert began in 2010. The game will be free-to-play, and will feature an engine made just for the title, made to handle the seamless world and large-scale castle sieges. Black Desert takes place in a fantasy world, and centers around the conflict between two rival factions: the Republic of Calpheon, and the Kingdom of Valencia. The title has gone through closed beta sessions already, with this being the first open beta session. The game has been confirmed for a western release.

A number of features will be coming to Black Desert. This includes a dynamic weather system, which will include large-scale events, such as typhoons, that will affect gameplay. There will also be seasonal weather that will require players to adjust their equipment, such as using warmer clothing in a colder area. There will be player housing that can go from tents to houses and buildings. Players can furnish their housing and hire NPCs to work in them. There will be a day/night cycle that will determine which NPCs show up at certain times, the types of monsters that players will encounter, and different content that depends on whether or not it is day or night.

Black Desert is expected to release on PC. It is unknown if the game will reach out to other platforms.

I’m Load The Game’s co-founder and community manager, and whenever I’m not answering questions on social media platforms, I spend my time digging up the latest news and rumors and writing them up. That’s not to say I’m all work and no fun, not at all. If my spare time allows it, I like to engage in some good old fashioned online carnage. If it’s an MMO with swords and lots of PvP, I’m most likely in it. Oh, and if you’re looking to pick a fight in Tekken or Mortal Kombat, I’ll be more than happy to assist! Connect with me by email markjudge (@) loadthegame.com only
@@MarkJudgeLTG
Previous Lumia Denim update adds 4K recording to Windows Phones
Next Holiday 2014: Xbox One Vs. PS4