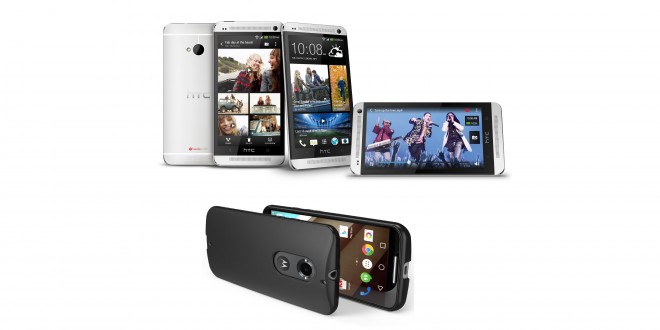 The HTC One M7 was launched to pretty good reviews and the handset has positive opinions gathered in a corner with a few complaints about overheating issues. The Moto X on the other hand is a newer flagship released this Fall by Motorola which offers great bang for buck and near-stock Android. Out of these two handset, the HTC One M7 is one of those devices that marks the spot of a good idea, front facing speakers and a metal unibody.

The HTC One M7 is not exactly the top-notch high-end device you would call a flagship today, but last year it definitely was among the best phones out there. It remains a great example of combining design and utility, even though the large bezels might be bothersome to some people. HTC attempted to create a phone with a metal unibody and the end result came out looking great in my opinion. I honestly prefer the HTC One M7 design over the One M8 one, because I like my phones matte and simple. That doesn’t mean that the One M8 didn’t improve sensibly over its predecessor.

The main issue many owners of the One M7 is overheating, which could be explained away as the inability of the hot air created by the processing phone to disperse within the handset correctly and thus heating up certain parts of the phone. Some users reported the HTC One M7 overheating problem as being actually painful, but they might just be babies when it comes to pain. Alas, it is a drawback that the phone has these issues, but subsequent updates should fix the issue. We’re sure that the Android 5.0 Lollipop build that should complete its rollout soon to the One M7 will resolve most of the issues. Report back if you’ve different experiences.

The Motorola Moto X 2014 is a pretty popular phone and has been one since its initial unveiling at IFA Berlin 2014. I like unconventional phones so I love how Moto Maker lets you choose from various back panels before buying the phone. You can now get a Limited Edition football leather back panel made of authentic Horween  football leather! While that isn’t worth the extra $25 in my mind, I know quite a few people who would love to have leather on their phones. Regardless of this neat feature, the Moto X is designed with a metal frame and polycarbonate, leather or wood back panel. It’s a pretty ergonomic phone which is most famous for its affordable price.

The Motorola Moto X will set you back around $500, the cheapest I’ve found costing $400, but if you want to save some cash, you can opt for a used or refurbished one. While the price still isn’t mind-bogglingly low, it still is a pretty decent amount that one would pay for a flagship on a spree. I would have to save up a bit if I would want to get the Galaxy Note 4 for example, but if I had to soothe my thirst for new electronics, I would definitely go for the Moto X, especially for a refurbished one which U saw going for $200. I won’t advise contracts, but they are an option, too. The HTC One M7 price isn’t over the roof either, and it’s actually a cheaper option that the Moto X. The lowest price I’ve seen for the One M7 is $200, completely new. That’s a steal, too, but considering the fact that it is last year’s flagship and its specs could be better, it’s an appropriate price.

Since we started talking about specs, let’s what the HTC One M7 and Moto X 2014 have under the hood. First off, the One M7 boasts a 4.7 inch Super LCD3 display with a 1080*1920 resolution amounting to 469 ppi pixel density. While that display is small, it certainly packs quite the punch with bright color and sharpness. It does suffer a bit when it comes to viewing angles, though. The Moto X 2014 display is bigger, measuring 5.2 inches. It comes as an AMOLED panel and has the same 1080*1920 resolution with a smaller 424 ppi pixel density. If you put these displays side to side, the HTC One M7 will seem just a bit crisper.

The HTC One M7 flops when it comes to camera a bit, as it adorns a 4 MP Ultrapixel camera which is helped out by optical image stabilization. While the primary camera struggles when it comes to low-light images or detailed shots, the optical image stabilization definitely helps with clear photos. Its front camera measures 2.1 MP, so there’s not much to comment on that, aside from it being enhanced with a wide angle lens and HDR, which is nice in fact. The Moto X 2014 has a 13 MP primary camera with a dual LED flash and a 2 MP front camera. We could have definitely done better if OIS was in the package, but overall the Moto X camera is pretty decent. I would call this almost a tie.

Moving on to hardware, the HTC One M7 sports a Snapdragon 600 CPU with 2 GB RAM  and either 32 or 64 GB internal storage with no microSD card slot available. You’ve got an Adreno 320 GPU coupled with the CPU and pretty good Beats Audio stereo speakers and the front. NFC, Wi-Fi, LTE and an IR blaster are also nice features that you might find useful on the flagship. All those things are then powered by a 2300 mAH battery, which is average, to be honest. With intensive use, the battery doesn’t last very long and the overheating problem becomes an issue, but with moderate use, the handset handles life just fine being able to last until morning.

Moto X specs are a bit better, to be honest, but that’s because it’s still a fresh release while the HTC One M7 has passed its one-year mark. We’ve got a Snapdragon 801 CPU running the show, backed by an Adreno 330 GPU, 2 GB RAM and either 16 or 32 GB internal storage, no microSD card slot available. With the better processor, the Moto X is more capable to run intensive apps and games and will handle almost anything you throw at it. The One M7 tends to struggle with graphics-heavy games and apps, but it will still keep a good performance record. Nonetheless, if you wan’t future-proof, Moto X 2014 is the way to go. Other Moto X specs include NFC and fast charging, as well as Bluetooth, Wi-Fi and LTE. The Moto X has the same 2300 mAH battery and will take you through 24 hours of mixed use without an issue, so it should be good for most people since it will make it until morning with average use.

Android 5.0 Lollipop is now officially rolling out for both the Moto X and HTC One M7, so no matter which of these you would go for, you would benefit from the Android treatment. While Motorola keeps it close to stock Android with the Moto X, HTC uses Sense to enhance the user experience. Sense is a pretty friendly UI and most Android fans enjoy it, but if you want near-stock Android out of the box, you can have with the Moto X. You can have it with the One M7, too, but you need to be familiar with rooting your device if you want to get.

After reviewing prices as well as bang for buck, drawing a conclusion is pretty hard and it would be unfair to determine a winner since we are talking about devices with a large release date gap. Considering the price you are paying, the HTC One M7 is a great deal and would certainly not disappoint the average smartphone use. But if you are looking for spotless performance and a high-end configuration, the Moto X 2014 would be better for you. Both flagships have great prices and great bang for buck, so no matter which you choose, it should be satisfactory at least. I would go for the HTC One M7 because I love the design and the power it has would suffice for my daily smartphone use, but I have to admit that I’m more of a light daily user. I have spurs of use, rather. In any case, let us know which flagship you think would be the better investment.

My life-long dream has been to test out every gadget on the market! Considering the fact that I've rapidly destroyed almost every gadget I've had so far, I'm not inclined to owning something, so my ideal outcome would be to have a different gadget each month. I'm really into smartphones, wearables and tablets and I love Playstation and Xbox, I'm sure I'll beat you at your own game (after a month of training... or two)
Previous New Final Fantasy XV Details
Next Nokia Lumia 1320 successor rumored to pack 14 MP PureView camera