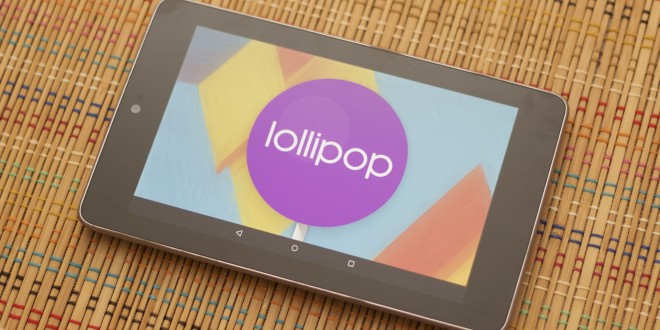 The Nexus 7 is getting Android 5.0.2 Lollipop as we speak, and the factory image is available too

The Nexus 7 has been having issues with the original Android 5.0 Lollipop update, but the newest OTA and factory image for build 5.0.2 should definitely fix these problems. The Nexus 7 is last year’s tablet from Google and Asus and it is appreciated for its low price, stock Android as well as pretty good performance and battery life. Now, with Android 5.0 Lollipop owners of the slate can enjoy all the great features the new OS brings without the lags, crashes and freezes the original build had.

Android 5.0 Lollipop is well underway, and the Nexus 7 is the latest to receive the 5.0.2 factory image. We reported last week that the 5.0.1 factory image for Hammerhead aka the Nexus 5 were available, after T-Mobile sent the OTA out to the Nexus 5 and Nexus 6. The Nexus 7 had is now receiving Android 5.0.2 Lollipop over the air, so you should see a notification about that on your slate soon enough. The update should fix storage issues as well as alarms on the tablet.

Even though the Nexus 9 is already out and is boasting a configuration superior to the Nexus 7, the latter is still a great compact budget tablet that will fulfill many people’s needs when it comes to games, media consumption and social media. If you aren’t in the mood to wait for the OTA to hit your tablet, you can always opt for the factory image which is now available online. Factory images are usually intended for those that tend to play around with ROMs and device customization, in case they botch something up and want their device reset to the stock Android we’re proud of. Note that flashing a factory image isn’t easy, so you would be better off waiting for the update to hit if you’re no previous experience with flashing Android devices. You can also use the factory image to get Android 5.0.2 Lollipop running on your Nexus 7 if you’ve rooted your device.

My life-long dream has been to test out every gadget on the market! Considering the fact that I've rapidly destroyed almost every gadget I've had so far, I'm not inclined to owning something, so my ideal outcome would be to have a different gadget each month. I'm really into smartphones, wearables and tablets and I love Playstation and Xbox, I'm sure I'll beat you at your own game (after a month of training... or two)
Previous Sense 6.0 and Android 5.0 Lollipop make a great team on the HTC One M8
Next Asus ZenFone coming to CES 2015 with dual cameras

Google is currently working hard to provide some of its devices with the latest Android ...