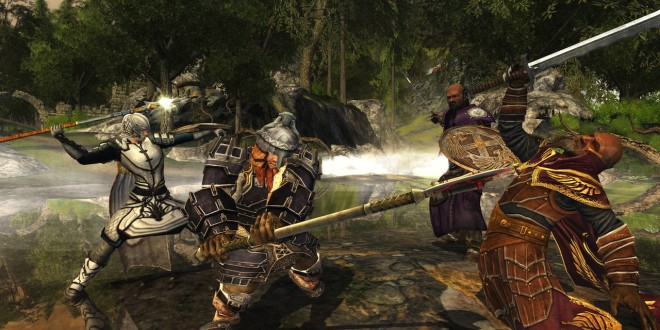 Lord of the Rings Online devs crackdown on exploit users

Lord of the Rings Online allows players to experience the world created by J.R.R. Tolkien. Recently, players have been taking advantage of an exploit in the game, and developer Turbine is cracking down on those using it.

The exploit allows players of Lord of the Rings Online change how powerful their characters are in the game world. Turbine has already banned players, and will continue to ban them as they are caught. They had this to say on the game’s forum: “It has come to our attention that some players have been utilizing an exploit to change how powerful their characters are in the game world. Upon receiving reports of the issue we began an investigation. Due to the way our log system works we can definitively detect every account that is taking advantage of this exploit. Multiple accounts have already been banned. The exploit is not something that can be done in the normal operation of the game or ‘by accident’ and is being done to deliberately cheat, therefore normal players should not be impacted by this issue.” Turbine then mentioned that they are working on a fix, and that those who are caught can be banned permanently.

Originally released in 2007, Lord of the Rings Online was originally subscription based, though the game is now free-to-play. The game has seen the release of five expansion packs since it was put out. The title takes place during the time of The Lord of the Rings. There is a paid VIP subscription in Lord of the Rings Online for those that want it, which includes access to all game regions and content not part of the expansion packs, the ability to quick travel between major towns, the removal of the currency cap, and the ability to send money through the mail system.

Lord of the Rings Online is available on PC. The game’s Yule Festival is currently going on to celebrate the holidays.

I’m Load The Game’s co-founder and community manager, and whenever I’m not answering questions on social media platforms, I spend my time digging up the latest news and rumors and writing them up. That’s not to say I’m all work and no fun, not at all. If my spare time allows it, I like to engage in some good old fashioned online carnage. If it’s an MMO with swords and lots of PvP, I’m most likely in it. Oh, and if you’re looking to pick a fight in Tekken or Mortal Kombat, I’ll be more than happy to assist! Connect with me by email markjudge (@) loadthegame.com only
@@MarkJudgeLTG
Previous Xbox One Telltale Games for $110
Next Shroud of the Avatar Puts Out Release 13