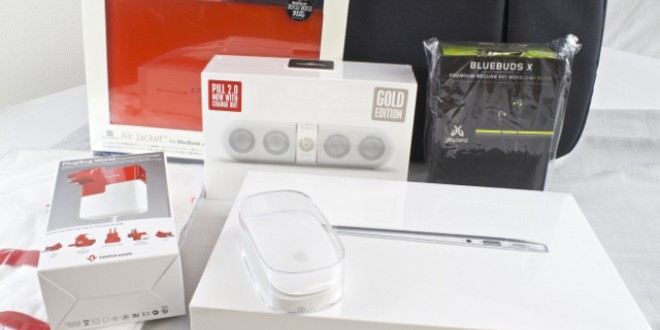 Lucky Bags are the new treats Apple is preparing for Japanese tech enthusiasts which will include surprise items that you can buy for a set price. The Lucky Bags will be available in Japanese Apple Stores starting January 2nd, but those are the only locations they will be available for purchase, bummer. Lucky Bags are a tradition for Japanese Apple stores and are part of a Japanese tradition that starts on New Year’s Day. The Fukubukuro is a customary sale, so to speak, which involves retailers selling sealed bags of mysterious items at discounted prices.

Apple’s Lucky Bags will cost $300 at least, going upwards depending on what might be inside. Apple has been part of the Fukubukuro tradition since 2015. Beware, Japanese Apple fans, as the Lucky Bags will only be available in limited numbers. While retailers don’t ever reveal what these mystery gift bags contain, you generally get a lot of value for the money you pay for them. Last year, Apple’s Lucky Bags were packed with 11 inch 128 GB MacBook Air units, Magic Mice, JayBird BlueBuds X wireless earphones, Twelve South PlugBug World travel plug adaptor, Beats by Dre Pill Speaker Gold Edition, Power Support Air Jacket Sleeve for the Mac, Apple T-Shirt and a Morphie juice pack powerstation mini portable battery. If you’re wondering how much the Lucky Bags containing these devices cost, you’ll be amazed. Even though the items in total value over $1,500, the bags cost around $350, which is a huge steal.

While we don’t know what this year’s Apple Lucky Bags will contain, we are fairly sure we’ll have some iPhone 6 units in there, maybe an iPad Air 2, an iPad Mini 3, some more Beats stuff, some accessories and definitely a stylish packaging for all. It is a shame that the Fukubukuro tradition hasn’t migrated from Japan to other markets, but we might see that change as retailers are clamoring for more and more customers. If you live in Japan and are planning to get an Apple Lucky Bag, report back and let us know what kind of treats the company has put in them. Good luck landing a sweet deal!

My life-long dream has been to test out every gadget on the market! Considering the fact that I've rapidly destroyed almost every gadget I've had so far, I'm not inclined to owning something, so my ideal outcome would be to have a different gadget each month. I'm really into smartphones, wearables and tablets and I love Playstation and Xbox, I'm sure I'll beat you at your own game (after a month of training... or two)
Previous Galaxy Tab 5 10 inch slate in the works from Samsung
Next Xiaomi Arch: the Galaxy Note Edge of China