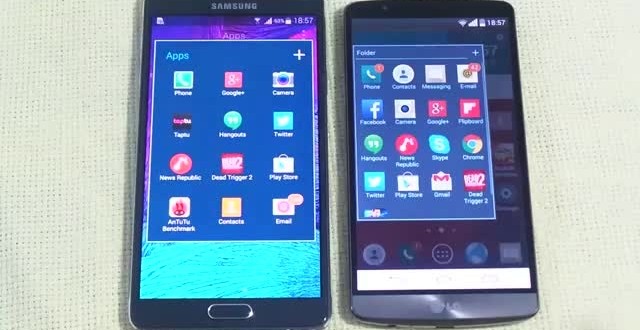 A new chapter in the already classic battle between Korean tech giants Samsung and LG is drawing close. Earlier this year, the latter launched one of the best smartphones of 2014 in the form of the LG G3, only to be later dethroned by the Samsung Galaxy Note 4. Still, the two devices are overall equally matched, which suggests that the upcoming battle could very well swing in LG’s favor. The LG G4 flagship is expected to improve on its predecessor in various ways, but will it end up being better than the Samsung Galaxy Note 4? As you might imagine, it’s pretty hard to say for certain right now, but we’re attempting to answer that question anyway by rounding up all the recent rumors about the LG G4 and comparing what we think we know with what we already know about Samsung’s phablet.

The Samsung Galaxy Note 4 comes equipped with arguably the best display currently available on the market. We’re talking about a 5.7-inch Super AMOLED screen with 1440 x 2560 resolution, 515 pixel density, and Corning Gorilla Glass 4 protection to boot. This is very similar to what the LG G3 offers, but can the LG G4 offer something even better? Well, rumor has it that the smartphone will end up with a 5.7-inch panel that may or may not feature 4K resolution. This is expected to be the new norm on all future flagships in the coming years, so it would definitely make sense. There’s also talk about a bendable display, which wouldn’t necessarily make the LG G4 better than the Samsung Galaxy Note 4, but it would definitely make it a very unique flagship. As for the design, word on the street is that LG is planning an overall thinner phone with an aluminum body and IP67 waterproof certification.

While the screen is expected to blow all sorts of minds just like its predecessor’s did, the hardware will likely not be anything to sneeze at either. A very popular rumor is saying that the LG G4 will sport the new Qualcomm Snapdragon 810 64-bit chipset, much like a future variant of the Samsung Galaxy Note 4. We should also see at least 3 GB of RAM again, although 4 GB is also possible, and better storage options in the form of 32 GB/64 GB complete with microSD support. These are not so much mere rumors, as they are a logical progression of the series. On that note, the LG G4 is said to come equipped with a much better 20.7 MP camera on the back. Finally, the battery will very likely receive a boost, especially if LG goes for the 4K display which will cause quite a bit of drain on the battery life. Overall the hardware should be up to par, if not better in some departments to what the Samsung Galaxy Note 4 features. The same thing can also be said about the software. The LG G4 will likely ship directly with Android 5.0 Lollipop or an upcoming update, while Samsung already planned to upgrade the phablet to 5.0.1, but may end up offering 5.0.2 by the time its rival arrives.

Which brings us to the release date. The Samsung Galaxy Note 4 has already been available to purchase for a while now, although it wasn’t exactly widely available from the get-go. Seeing as how the competition on the market is getting fiercer by the day, LG is reportedly planning to launch the next iteration a bit sooner this time around. Most sources suggest that an announcement regarding the LG G4 will be made at one of the major tech events in March. It is there when we should hear the official release date and maybe something about the price as well. As it stands, we suspect that the LG G4 will end up being in the $600-$700 price range, a bit cheaper that the Samsung Galaxy Note 4, which usually goes for about $825 or so.

I’m Load The Game’s co-founder and community manager, and whenever I’m not answering questions on social media platforms, I spend my time digging up the latest news and rumors and writing them up. That’s not to say I’m all work and no fun, not at all. If my spare time allows it, I like to engage in some good old fashioned online carnage. If it’s an MMO with swords and lots of PvP, I’m most likely in it. Oh, and if you’re looking to pick a fight in Tekken or Mortal Kombat, I’ll be more than happy to assist! Connect with me by email markjudge (@) loadthegame.com only
@@MarkJudgeLTG
Previous Galaxy S6 leak shows off 5.5 inch display and metal unibody
Next Galaxy Tab 5 10 inch slate in the works from Samsung