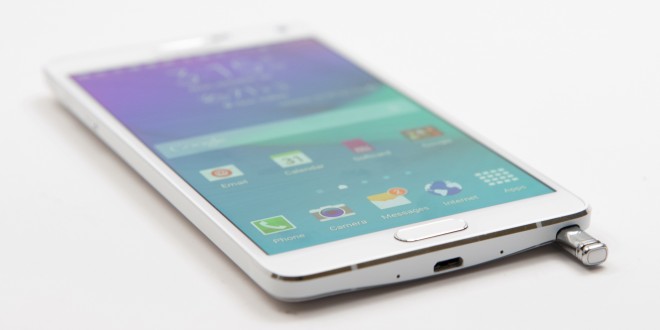 A new Galaxy Note 4 LTE-A handset has been announced by Samsung and the company says the handset should be released early next year, in January to be more specific. The handset becomes interesting news because it packs quite a punch compared to the original Note 4. Not only does the Note 4 LTE-A variant have better specs, but it also packs LTE Category 9 and 450Mbps download speeds, which make it quite the desirable flagship of the future.

The Galaxy Note 4 LTE-A ups its game compared to the original handset introduced at IFA by sporting the newest Snapdragon 810 CPU, making this new release the first ever commercial handset to use that chipset. Even though the handset is set for a January release, the company will only be selling the phablet in South Korea for starters. We don’t have confirmation on an international release, but we sure hope the handset makes it across the world.

Compared to the original, the Galaxy Note 4 LTE-A ups its game quite a bit. While the first variant of the Note 4 has LTE-A with speeds up to 150Mbps, the bump to a Cat 9 LTE modem makes the new release almost three times as fast when it comes to internet speeds. While the speeds come with LTE Cat 9, you won’t be able to use them until mid-2015, as carriers need to keep up. We don’t have a price for the Galaxy Note 4 LTE-A variant, but we can speculate that it will be at least $200 more than the original model. As for availability, there are many doubts circulating around saying that the handset won’t be available outside of South Korea. At least not for now. With the announcement that the Galaxy Note 4 LTE-A will be available for purchase in January, we can consider the rumors about Qualcomm having issues with the Snapdragon 810 CPU officially debunked. That being said, we are prepping ourselves to see the Galaxy S6, HTC One M9 and LG G4 all sport the new Snapdragon 810 CPU, launching in the first half of 2015. Yay!

My life-long dream has been to test out every gadget on the market! Considering the fact that I've rapidly destroyed almost every gadget I've had so far, I'm not inclined to owning something, so my ideal outcome would be to have a different gadget each month. I'm really into smartphones, wearables and tablets and I love Playstation and Xbox, I'm sure I'll beat you at your own game (after a month of training... or two)
Previous LG G4 to feature a stylus pen and 5.3-inch display
Next Xiaomi flagship confirmed by exec for January