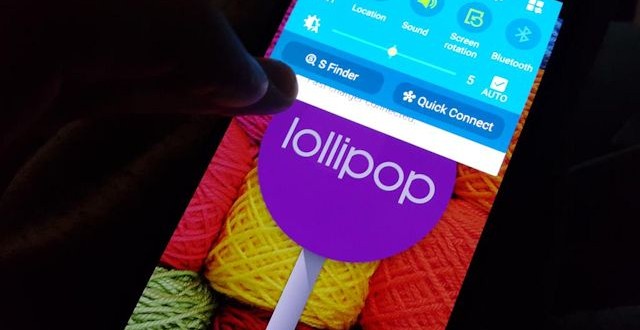 If you own a Samsung Galaxy S5 smartphone and haven’t received the Android Lollipop update just yet, don’t worry because you might see it on your device very soon. The update roll out initially began earlier this month but was reportedly only available to users living in Poland. More recently however, owners of the Samsung Galaxy S5 who are living in Spain have reported that Android Lollipop came to their country as well. Presumably, this means that the update will soon arrive in other European countries in due time and then make its way to the US and other markets. The users are saying that at the moment only the SM-G900F model is eligible for the update.

In regards to what Android Lollipop brings to the table, the full change log is downright huge, so I’ll just give you some of the highlights. Samsung Galaxy S5 owners can look forward to “a bold, colorful, and responsive UI design for consistent, intuitive experiences”. Moreover, the update also brings locks screen notifications, Priority mode, enhanced battery life, improved security, Device Sharing, better performance, as well as many other new features. Android Lollipop is also capable of supporting 64-bit processors and apps created using this architecture. The Samsung Galaxy S5 is the first device manufactured by the Korean tech giant to receive the latest update but you can expect to see version 5.0 or higher on some of their other devices as well in the near future.

The next in line to upgrade to Android Lollipop will probably be the Samsung Galaxy Note 4 “phablet” smartphone. Unlike the Samsung Galaxy S5, the phablet is expected to skip 5.0 entirely and upgrade directly to 5.0.1 when the time comes. This is expected to happen sometime in the coming months, but nothing specific was revealed just yet. We’ll let you know as soon as we learn anything else so stay tuned.

I’m Load The Game’s co-founder and community manager, and whenever I’m not answering questions on social media platforms, I spend my time digging up the latest news and rumors and writing them up. That’s not to say I’m all work and no fun, not at all. If my spare time allows it, I like to engage in some good old fashioned online carnage. If it’s an MMO with swords and lots of PvP, I’m most likely in it. Oh, and if you’re looking to pick a fight in Tekken or Mortal Kombat, I’ll be more than happy to assist! Connect with me by email markjudge (@) loadthegame.com only
@@MarkJudgeLTG
Previous Top Five Action Games of 2014
Next Galaxy Alpha to be discontinued in favor of Galaxy A3, A5 and A7

The Samsung Galaxy S5 is the flagship for the year 2014 from the South Korean ...