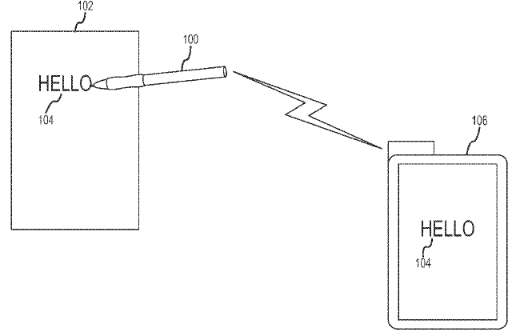 Apple Stylus patented, although we don't know if it will be made

Indeed, an Apple Stylus seems to be in the works after a patent was awarded to Tim Cook and co. While styluses are pretty common nowadays, the Apple Stylus will be a multi-functional device that will not only work on a smartphone screen, but most any surface you decide to use it on. That means that it can convert handwriting into a digital format, which would come in handy in many situations if you think about it. It could revolutionize note-taking altogether, since it’s an Apple Stylus and it will be as hyped as a gadget can be.

The Apple Stylus is being dubbed the Communicating Stylus and the company was awarded the patent on December 30 by the U.S. Patent and Trademark Office. In the patent description, the Apple Stylus is said to be able to convert any type of handwritten text into a digital version of itself, provided it is connected to a gadget. You can supposedly connect it to a smartphone, a tablet or “any digital computing device”.

You will be able to get the stylus with various exchangeable tips, including a real ink tip, a marker tip for whiteboards that are used in schools and presentations and a rubberized nub like what we would find on the S Pen or any other random stylus for devices out there. The gadget will be outfitted with an accelerometer (or even a full-blown 9 axis sensor) and it will be activated as soon as you pick it up, remove it from its dock, start writing or by the push of a button. The Apple Stylus is also outfitted with motion sensor that can detect a 3D plane, which would mean that you could scribble things in the air and the stylus would send them to your device of choice and present them in a notepad digitally, or something like that.

Customization will also be included in the Apple Stylus, the patent detailing the ways you can tell the pen to send information to the digital counterpart of itself, choosing between continuous or staggered transmission that would preserve battery life. That’s all we know about the patent right now, but we are wondering whether the Apple Stylus will use Bluetooth to connect to other devices, or some other method like a local Wi-Fi network or 3G. At the same time, we’re wondering what kind of battery life the nifty little gadget will have. Our biggest question though, is whether Apple will actually release a stylus, since the patent has been around for 5 years now and we’ve no guarantee that Tim Cook and co will actually manufacture the gadget. What would you use the Apple Stylus for? I would certainly love it at school, being able to have a handwritten and a digital copy of my notes saved at the same time.

My life-long dream has been to test out every gadget on the market! Considering the fact that I've rapidly destroyed almost every gadget I've had so far, I'm not inclined to owning something, so my ideal outcome would be to have a different gadget each month. I'm really into smartphones, wearables and tablets and I love Playstation and Xbox, I'm sure I'll beat you at your own game (after a month of training... or two)
Previous HTC promises to “blow you away” this year with “huge surprises”
Next Microsoft Lumia 1330 spotted in new leaked image