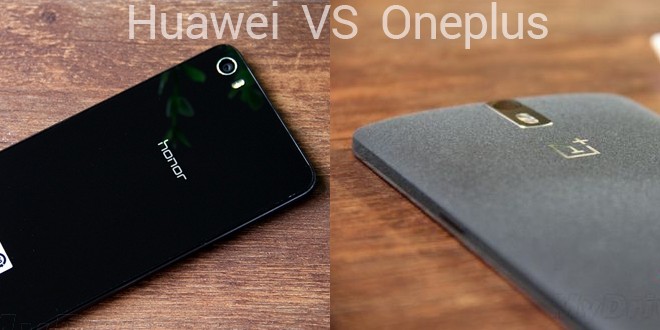 Powerful phablets have traditionally been very expensive until the arrival of the OnePlus One. The Chinese startup that came up with the idea for the “flagship killer” is now working on a sequel and we can expect the upcoming flagship to be even more impressive than the current one. Meanwhile, a few other manufacturers have followed in the steps of OnePlus by launching their own cheap and powerful phablets. An example of such a device is the Huawei Honor 6 Plus, which only recently left China and made its way to the western markets. Chinese companies are already infamous for coming up with powerful devices at dirt cheap prices, both the OnePlus One and the Huawei Honor 6 Plus being prime examples of this. But which one is offering the better device in this case? Let’s find out.

OnePlus One vs Huawei Honor 6 Plus – Display and design

At first glance we’re looking at two very similar devices and this might not be a coincidence. The recently released Huawei Honor 6 Plus seems to have been built as a competitor or maybe an alternative to the OnePlus One. As such, both devices sport 5.5-inch displays with 1080 x 1920 resolution and 401 pixel density. The dimensions are more or less similar as well, although the Huawei Honor 6 Plus is considerably thinner at 7.5 mm compared to the OnePlus One’s 8.9 mm. One the other hand, the latter is a bit lighter as it only weights in at 162 grams, 3 grams less than its competitor’s 165 grams. Design-wise, we’re mainly looking at plastic vs plastic and little to no flashy features aimed at catching the eye. Don’t get me wrong, bot devices look great, but they don’t have anything that could be considered unique. It is worth mentioning however that various back covers for the OnePlus One are available and one of them is made out of bamboo. If you manage to get your hands on such a cover, then yes, you will have a very distinct smartphone to brag about, but otherwise there’s nothing jaw-dropping here.

OnePlus One vs Huawei Honor 6 Plus – Hardware and software

A quick peak under the hood of the Huawei Honor 6 Plus reveals its HiSilicon Kirin 925 chipset with Quad-core Cortex-A15 & quad-core Cortex-A7 processor combo, complete with Mali-T628 MP4 GPU. and 3 GB of RAM. Speaking of combos, the device also comes equipped with a dual-camera setup consisting of two 8 MP sensors on the back, along with another 8 MP selfie snapper on the front. Other specs include 16GB/32GB storage options with microSD support (up to 128 GB) and a huge 3,600 mAh battery. Meanwhile, the OnePlus One packs the Qualcomm Snapdragon 801 quad-core processor clocked at 2.5 GHz with Adreno 330 GPU and 3 GB of RAM. The flagship killer offers a more traditional 13 MP primary camera on the back coupled with a 5 MP secondary shooter on the front. Storage options here include 16 GB and 64 GB with no microSD card support, and the battery sits at 3,100 mAh. In terms of software, the Huawei Honor 6 Plus currently offers Android 4.4 KitKat with the Emotion 3.0 user interface on top. As for the OnePlus One, we’re looking at the Android-based CyanogenMod operating system and the promise of a custom ROM based on Android Lollipop scheduled to be released in the near future.

OnePlus One vs Huawei Honor 6 Plus – Price and final thoughts

As mentioned at the very start of this article, these phablets are very cheap, with a price tag that makes a lot of people feel like Apple, Samsung, LG, and all the other big manufacturers are simply ripping them off. The Huawei Honor 6 Plus is currently available only in white and with 16 GB of storage on board in the western world. While there aren’t many options to choose from, the device will only cost you $400. The OnePlus One takes it even further with its $300 price tag for the 16 GB model and $350 for the 64 GB version. It’s hard to say which one is better seeing as how they both offer so much and cost so little. The OnePlus One is a bit cheaper and offers the possibility of customization while also packing a more interesting operating system that will soon be upgradable to a custom version of the highly sought after Android Lollipop. The Huawei Honor 6 Plus has plenty going on for itself as well, with potentially more storage, increased battery life, and a rather unique camera setup. Personally, I would go for the OnePlus One just because of the software,, but I will wholeheartedly recommend any of these two cheap phablets as they both offer an unparalleled bang for your buck.

I’m Load The Game’s co-founder and community manager, and whenever I’m not answering questions on social media platforms, I spend my time digging up the latest news and rumors and writing them up. That’s not to say I’m all work and no fun, not at all. If my spare time allows it, I like to engage in some good old fashioned online carnage. If it’s an MMO with swords and lots of PvP, I’m most likely in it. Oh, and if you’re looking to pick a fight in Tekken or Mortal Kombat, I’ll be more than happy to assist! Connect with me by email markjudge (@) loadthegame.com only
@@MarkJudgeLTG
Previous iPad Air 2 vs. Lenovo Yoga 3 Pro: convertible or sleek slate?
Next Meizu MX4 vs Galaxy Note 4: cheap vs feature-packed