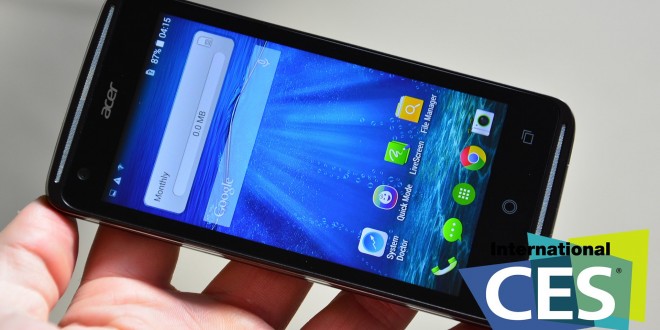 The Xiaomi Redmi 2 was just launched and it’s the perfect competitor for Acer’s latest Liquid smartphone, seeing as it has an even lower price point and similar mid-range specs. Let’s see which looks like the better acquisition. Acer Liquid Z410 specs include a 4.5 inch display with a 540*960 resolution adding up to a decent 245 ppi pixel density. Under the hood, we’ve got a 64 bit MediaTek MT6732 CPU with the ARM Mali-T760 GPU. Cat 4 LTE is also part of the package, not to mention a battery that will supposedly last for 400 hours in stand-by and 5 and a half hours if you decide to talk to your bf/gf on a bad day. We’ve also got a nice DTS Studio Sound front facing speaker, which could provide for great sound quality.

Camera-wise, the Acer Liquid Z410 sports a 5 MP shooter on the rear with LED flash, and a 2 MP front-facing shooter as well. The AcerRapid key is positioned under the rear camera, allowing access to programmable shortcuts to various apps and actions. Gesture shortcuts are also available through Acer QuickTouch, although we don’t know if there are new gestures to speak of yet. With these specs and the $155 price, the handset isn’t much of a steal compared to the Xiaomi Redmi 2, which has a larger display with better resolution, a Snapdragon 410 CPU with the same type of 64 bit configuration and a better, 8 MP camera on the rear, all that for $119. What do you think about the Acer Liquid Z410? Is this mid-ranger worth the trouble or would you rather go for a cheaper, better specced Chinese smartphone?

My life-long dream has been to test out every gadget on the market! Considering the fact that I've rapidly destroyed almost every gadget I've had so far, I'm not inclined to owning something, so my ideal outcome would be to have a different gadget each month. I'm really into smartphones, wearables and tablets and I love Playstation and Xbox, I'm sure I'll beat you at your own game (after a month of training... or two)
Previous HTC One M9 Hima renders show off the CES 2015 star
Next Archos 50 Diamond and cheap tablets announced ahead of CES