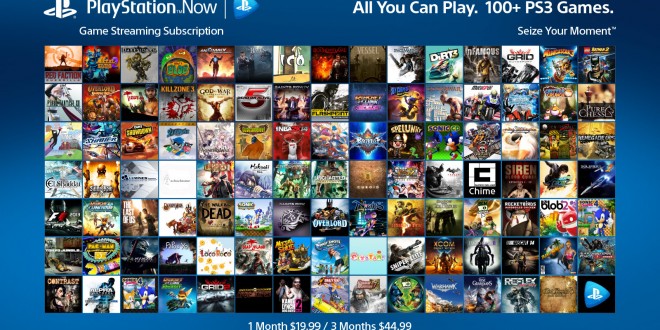 Sony purchased Gaikai, a game streaming service back in July of 2012. At CES last year PlayStation Now was announced to be coming to PlayStation 3 in a closed beta. That beta then became open in July of 2014 for all PlayStation 4 users. The open beta came to PlayStation 3 in September and PlayStation Vita in October. The service will come to Europe in 2015 and Sony also announced last month in December that PlayStation Now will be coming to other brands such as Samsung’s Smart TVs. Before this overall subscription price, games were sold individually for 4 hour, 7 day, 30 day, and 90 day time frames with varying prices between individual titles.

PlayStation Now requires at least a 5-MBps internet connection as well as a Dualshock 3 controller. Unfortunately there are no PlayStation 1 or PlayStation 2 titles yet available but they are still being planned on releasing sometime in the future. Currently a majoirty of experiences of PlayStation Now has been that the service is fine but not as great as playing the game natively on the PlayStation 3. The service has a long way to go before it’s something that you should definitely check out. While the PlayStation Now subscription pricing is moderate and not expensive, the service itself isn’t worth the price tag just yet.