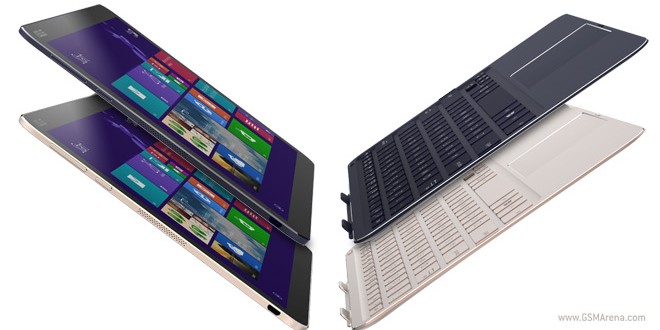 Asus didn’t stop at phones this week at its CES 2015 booth, although we are quite impressed with the Asus ZenFone 2 and ZenFone Zoom. Alas, this Taiwanese company doesn’t focus on smartphones, even though it has done a pretty good job with them lately. Hardware, laptops, computers, tablets and convertibles are the business of Asus and it has demonstrated that once again with a new line of convertibles, the biggest of which being the Asus Transformer Book T300 Chi.

The Asus Transformer Book Chi line contains three different convertibles we can play with, smaller and larger ones. The smallest of them all is the T90 Chi, which sports an 8.9 inch display with a magnetic keyboard that can be attached to it. It has a 1280*800 resolution, which is a bit low for a tablet especially if it costs $300, but the T90 Chi does compensate a bit with the fanless design. The larger T100 Chi has a 10.1 inch display with a higher 1920*1200 resolution. Both of these tablets run on the 1.46 GHz Intel Atom Z3775 CPU with 32 or 64 GB eMMC storage. They are not particularly fast, but for $300 and $400 respectively, they are nice Windows 8.1 tablets to own.

Our favorite in the line-up is the Asus Transformer Book T300 Chi, which is the most impressive of them all. Asus pegs this device as a convertible that will directly compete with the Microsoft Surface Pro 3 and its design is supposedly thinner (with the magnetic keyboard included) than the MacBook Air. It’s the best looking tablet out of all three, and the Asus Transformer Book T300 Chi has the biggest price among them, too, retailing for around $800, depending on the variant you choose. That price is almost the same as the base price for the Microsoft Surface Pro 3, which doesn’t include a keyboard, making the magnetic keyboard being included in the price of Asus’ convertible a plus in our so-called comparative narrative. I like rhymes.

The Asus Transformer Book T300 Chi will have two variants available when it is released later in the year, each running on different CPUs. One of them runs the Intel Core M 5Y10 while the other employs the Intel Core M 5Y71. The first CPU clocks at 0.8 GHz and boosts to 2 GHz, while the second clocks at 1.2 GHzz and boosts to 2.9 GHz, the latter being the more powerful one. Otherwise, the Asus Transformer Book T300 Chi in both variants sports a pretty neat 12.5 inch display with either a 2560*1440 resolution on the more powerful variant or 1920*1080 resolution on the base model. The available storage on both is 128 GB SSD, which is enough, in my mind, but might be too tiny for others.

The Asus Transformer Book T300 Chi is clearly the flagship in the line, but the T90 and T100 are also noteworthy devices. While the T300 doesn’t exactly compete with the Surface Pro that much, the whole line offers a cheap alternative for those who need the functionality more than the performance. The fact that all three convertibles are as portable and versatile as you can get is a great plus and pull-factor, and they might become just as much hits as the T100 became last year.

My life-long dream has been to test out every gadget on the market! Considering the fact that I've rapidly destroyed almost every gadget I've had so far, I'm not inclined to owning something, so my ideal outcome would be to have a different gadget each month. I'm really into smartphones, wearables and tablets and I love Playstation and Xbox, I'm sure I'll beat you at your own game (after a month of training... or two)
Previous iPhone 6 and iPhone 6 Plus unlocked units finally reach the US
Next LG G4 must be “different” than its competitors in order to succeed says LG during CES