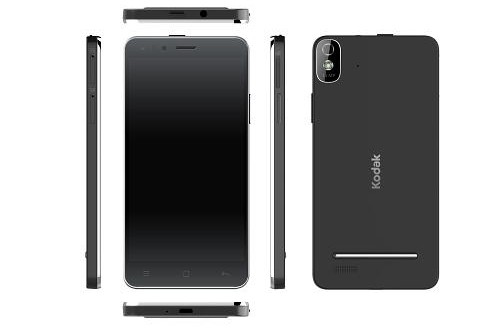 Even though we heard that Kodak is planning on getting into the smartphone business, we didn’t know exactly what to expect until now. The once-famous camera manufacturer finally let the cat out of the bag earlier today at CES 2015 and revealed the IM5 handset. So what are we looking at here? Well, at first glance some might understandably dismiss this for being just another mid-range phone and I can’t really blame them. However, the Kodak IM5 does have a pretty nice design going on for itself and an interesting camera to boot. The 13 MP sensor itself isn’t exactly jaw-dropping, but the device includes a couple of features that make it stand out from the crowd, if only just slightly.

Kodak claims that the IM5 will be “compatible with home printers” and you’re in luck if you own one because you’ll be able to print your own photos with the help of an app. This built-in app also allows you to edit the images and share them on Facebook, Instagram, or other social networks. While the idea seems pretty interesting, I can’t help but feel that this little gimmick will not be able to carry the phone by itself, which might end up facing a similar fate to the Amazon Fire Phone. On the other hand, the Kodak IM5 wasn’t massively hyped like Amazon’s device, so people’s expectations aren’t all that high.

As for the rest of the specs, we’re looking at mid-range hardware locked behind a 5-inch display with 720 x 1080 pixel resolution. A quick look under the hood reveals a mysterious octa-core processor clocked at 1.7 GHz, 1 GB of RAM, and 8 GB of internal storage memory. The memory can be expanded via microSD up to 32 GB. Aside from that, you have a 5 MP selfie camera on the front, black and white colors to choose from, and Android 4.4.4 KitKat on board. It’s worth mentioning that the Kodak IM5 will update to Android 5.0 Lollipop at some point, although a specific date was not mentioned for some reason. Kodak will first release the smartphone in Europe at the end of March, with more markets to follow shortly after, including the US. The price tag is expected to sit at around $250, unlocked.

I’m Load The Game’s co-founder and community manager, and whenever I’m not answering questions on social media platforms, I spend my time digging up the latest news and rumors and writing them up. That’s not to say I’m all work and no fun, not at all. If my spare time allows it, I like to engage in some good old fashioned online carnage. If it’s an MMO with swords and lots of PvP, I’m most likely in it. Oh, and if you’re looking to pick a fight in Tekken or Mortal Kombat, I’ll be more than happy to assist! Connect with me by email markjudge (@) loadthegame.com only
@@MarkJudgeLTG
Previous Razer announces Android-based gaming console called Forge TV
Next Dell showcases Alienware 15 and 17 gaming laptops at CES 2015