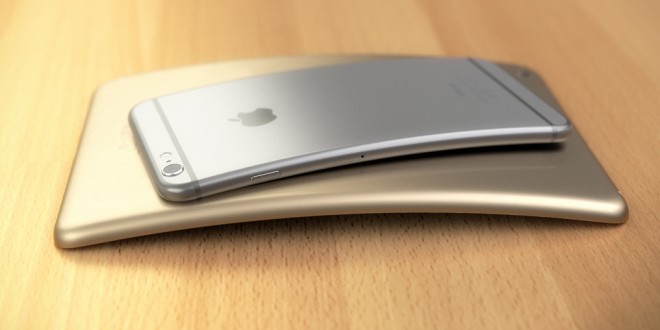 Apple just might end #bendgate completely with a flexible iPhone

With the launch of the LG G Flex 2, people are starting to get more and more interested in flexible, bendable phones and Apple seems to be catching up to the latest trend. A patent for a flexible iPhone has been given to the Cupertino-based company by the United States Patent and Trademark Office. While the patent unveiling isn’t a guarantee that we’re going to get a flexible iPhone anytime soon, it might suggest some sort of bendable hardware in the works from Apple.

Even though the patent filing didn’t say “iPhone”, just a flexible electronic device, our best guess as to what that might be results in an iPhone, since the Apple Watch has already been announced and demoed. At the same time, we could be looking at some sort of fitness tracking wristband. From the filing, we found out that that the alleged flexible iPhone will have a flexible display, housing and one or more flexible internal components. There are already batteries and displays in the works  from companies like LG and Samsung who have introduced their progress earlier in the year, but it is unlikely that the technologies will be finished and perfected by the end of the year.

With #bendgate causing a lot of rage around the iPhone 6 Plus fanbase, developing and launching a flexible iPhone might shut critics up about the design flaws in the latest phablet flagship from Apple. While we are almost entirely sure that the next Apple flagship smartphone won’t be flexible, we think that it is pretty likely that Apple will release a flexible iPhone in the future, since the trend is getting more and more popular. Whichever the case may be, we would love to see a product from Apple that can bypass physical damage that can result from dropping it or from carrying in a pocket (like it happened with certain iPhone 6 Plus units). Since the patent isn’t proof that such a flexible iPhone is indeed being developed by the company, we should wait and see for official word about such a gadget.

My life-long dream has been to test out every gadget on the market! Considering the fact that I've rapidly destroyed almost every gadget I've had so far, I'm not inclined to owning something, so my ideal outcome would be to have a different gadget each month. I'm really into smartphones, wearables and tablets and I love Playstation and Xbox, I'm sure I'll beat you at your own game (after a month of training... or two)
Previous The iPad Pro chassis looks bigger than ever in fresh leaked photo
Next OnePlus Two coming soon, but no OnePlus tablets in the future