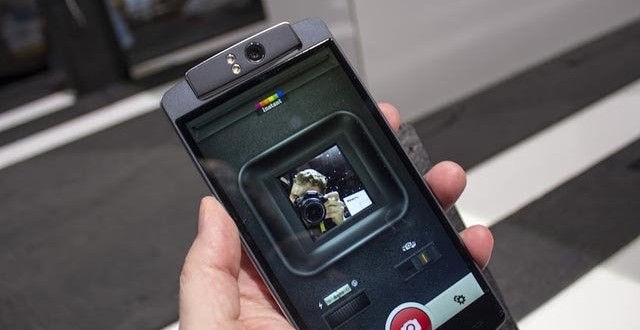 Nope, this isn't the Oppo N1, it's the Polaroid Selfie.

We’ve seen Chinese copies of popular western products on more than one occasion in 2014 but this year has started with an American company cloning a handset manufactured by a Chinese one. Specifically, Polaroid recently unveiling their Selfie smartphone at CES 2015 and it looks strikingly similar to the Oppo N1. One of the most notable features of the N1 and arguably its main selling point is the innovative rotating camera, which sadly isn’t all that unique anymore. The Polaroid Selfie phone also comes equipped with such a camera and to put even more salt on the wound, the overall design of the device is almost identical to that of the Oppo N1 as well.

Needless to say, the new smartphone didn’t go unnoticed, even if it didn’t have a strong presence at CES 2015. Among the people who found the Polaroid Selfie very intriguing were actually the folks over at Oppo. The Chinese manufacturer released a statement regarding the matter in which it clearly says that “Oppo has not licensed the design of the rotating camera to any third parties.” In other words, we might be looking at copyright infringement by Polaroid here. Oppo also went on to say that they “will continue to keep track of the event and reserves the right to take further legal action.”

It’s worth noting that the Polaroid Selfie smartphone falls into the mid-range category so it’s not completely identical to the Oppo N1, at least not in terms of hardware. From a visual standpoint however, you’ll be hard pressed to make a clear distinction between the two devices. Polaroid plans to launch the device in the US and elsewhere at some point later this year, with more details about availability and price to be announced at a later time. However, if Oppo does indeed end up taking legal action, the device might end up being delayed or even axed.

I’m Load The Game’s co-founder and community manager, and whenever I’m not answering questions on social media platforms, I spend my time digging up the latest news and rumors and writing them up. That’s not to say I’m all work and no fun, not at all. If my spare time allows it, I like to engage in some good old fashioned online carnage. If it’s an MMO with swords and lots of PvP, I’m most likely in it. Oh, and if you’re looking to pick a fight in Tekken or Mortal Kombat, I’ll be more than happy to assist! Connect with me by email markjudge (@) loadthegame.com only
@@MarkJudgeLTG
Previous Your iPhone 6 games have just gotten more expensive
Next Gold-plated iPhone 6 will soon be available for purchase

OPPO N3 to be available with two different builds

OPPO N3 will be attractive after all

Just a few days ago we were raving about the OPPO N3 and its tubular ...