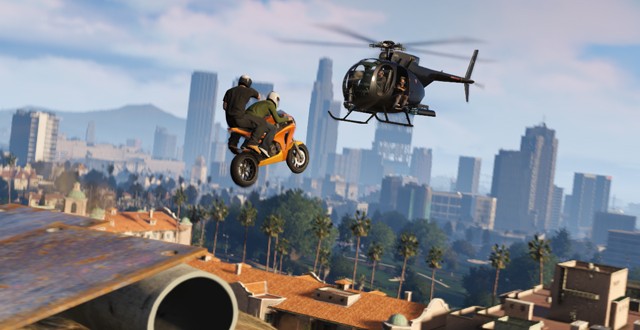 PC gamers were overjoyed at E3 2014 when Rockstar confirmed that GTA 5 would be coming to their platform in Fall 2014 along with the PS4 and Xbox One versions. While the company initially flat-out denied that the PC version was delayed, it was eventually announced that members of the “master race” should only expect to see the game on January 27th, 2015. With only a little over two weeks to go until that day, new rumors have begun to circulate and they’re not saying anything good. The latest word on the street is that Rockstar delayed the PC version of GTA 5 yet again by a month or two.

The company denied these rumors just like it did in the past, but it’s pretty hard to take what Rockstar says at face value anymore. Remember when we were promised Heists for GTA 5 Online back in April of last year? The highly anticipated feature was supposed to arrive last spring and yet it’s still nowhere to be seen. Granted, it was recently announced that Heists will be coming to the game in “early 2015” but we’ll just have to wait and see. Speaking of “early 2015”, strangely enough, that’s the release date of GTA 5 PC on Steam at the moment. Though it was initially listed as coming on January 27th, earlier this month it was changed without any explanation. Unsurprisingly, this started a new wave of rumors speaking of a possible delay.

Moreover, Steam still isn’t listing the system requirements – which are pretty important for a PC game – and you can’t pre-order the game either. Although you can pre-order from retailers such as Amazon, I think most of us would like to have GTA 5 on Steam regardless. At the moment, we’ll just how to trust Rockstar when they’re saying that GTA 5 is coming out on PC on January 27th, but there are certainly some strange things going on here if you ask me.

I’m Load The Game’s co-founder and community manager, and whenever I’m not answering questions on social media platforms, I spend my time digging up the latest news and rumors and writing them up. That’s not to say I’m all work and no fun, not at all. If my spare time allows it, I like to engage in some good old fashioned online carnage. If it’s an MMO with swords and lots of PvP, I’m most likely in it. Oh, and if you’re looking to pick a fight in Tekken or Mortal Kombat, I’ll be more than happy to assist! Connect with me by email markjudge (@) loadthegame.com only
@@MarkJudgeLTG
Previous Dota 2: Abyssal Underlord, Arc Warden and, Winter Wyvern coming this year
Next Batman Arkham Knight Statue Spoils Plot