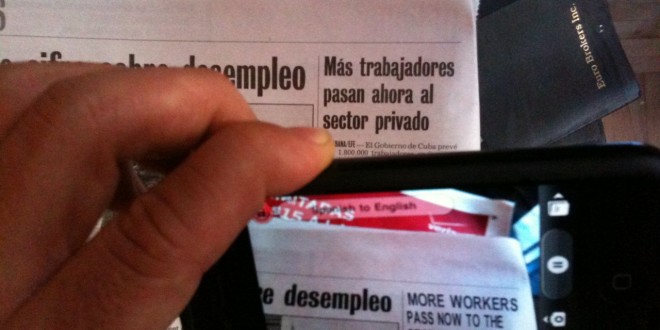 Google has introduced translation features long ago, but is continuously working on improving the features and possibilities within the service and the application. The company is trying to make the service usable in more and more countries and improving real-time translations in order to make inter-cultural encounters much more fun and easy. The Google Translate update description reveals that the new features are targeting people who live or travel to multicultural regions and interact with many different languages on a daily basis.

One of the new features introduced today is Word Lens, which is essentially the camera mode described above, but in an improved format. According to the company, you can now instantly translate texts off of street signs, menus, advertisements and any other pretty much clear text you find and can’t understand. The neat thing about it is that you can point your camera at the text and the app overlays the translated text over the one you are trying to decode. Even though the Google Translate update is supposed to bring in more supported languages, the Word Lens feature currently only works with French, German, Italian, Portuguese, Russian, Spanish and English languages.

The Google Translate update also brings forth an improved real-time translation feature, which will allow you to instantly translate conversation bits by just tapping the mic once to record and again to show the translation. What’s neat about this is that once you’ve started using the app and tapped the mic twice, you won’t have to tap it again as it will be ready to register input and output translations, making conversations smoother, according to Google. Let us know how the updated Google Translate app is working for you and what you have translated with it.

My life-long dream has been to test out every gadget on the market! Considering the fact that I've rapidly destroyed almost every gadget I've had so far, I'm not inclined to owning something, so my ideal outcome would be to have a different gadget each month. I'm really into smartphones, wearables and tablets and I love Playstation and Xbox, I'm sure I'll beat you at your own game (after a month of training... or two)
Previous World of Warcraft vs Final Fantasy XIV
Next Xperia Z Ultra Android update to Lollipop

LG G3 to receive Android 5.0 Lollipop OTA update in a matter of days

Apple’s iOS 8.1.3 update might be coming to your iPhone or iPad next week

The Skype Translator, which was originally revealed back in May has now entered the first ...