Galaxy S4 vs HTC One M7: future-proof flagships of yesteryear

The Galaxy S4 and the HTC One M7 were famous flagships of 2013 and still kept their game at the highest point in 2014, at least until other flagships like the Galaxy Note 4 and LG G3 arrived. Can these flagships keep their ground in 2015 or can they be considered as outdated and outdone by current and future releases? Even though they are old phones, they still keep up when it comes to software, and their specs may be called future-proof to some degree. Lets find out how the Galaxy S4 and the HTC One M7 size up next to each other and which could face the upcoming flagships of 2014.

The Galaxy S4 is actually becoming more appreciated than the Galaxy S5 due to its low price and okay spec sheet. Its successor has become a flop because of the poor choice in design and build materials, users complaining that the faux chrome frame looks awful and so does the band-aid inspired back panel on the device. The HTC One M7 is no less appreciated than its current counterpart, the One M8. The aluminum unibody with which the One M7 boasts is an excellent heat-dispenser, but it does encounter occasional overheating issues. Aside from its specs, the design of the One M8 hasn’t changed much since the One M7, save for the rounded, brushed metal finish of the chassis. Let’s see how the Galaxy S4 compares to one one of the most appreciated smartphones of 2013 AND 2014. 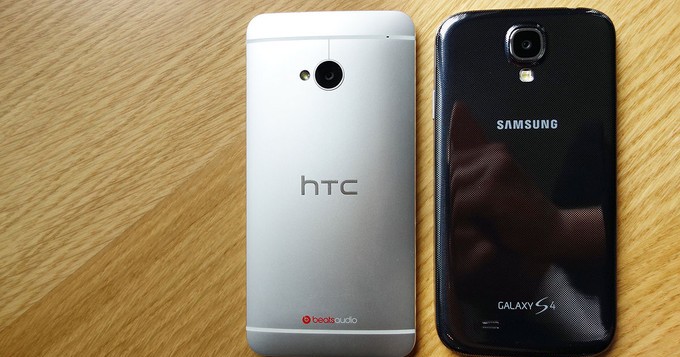 The Design of the Galaxy S4 isn’t anything to write home about, employing the usual elements that are descriptive of Galaxy flagships: plastic chassis, rounded edges, beefy home button, plastic frame. Even though many people are striving to get their hands on metal-clad smartphones, there is a segment of the population that still loves the plastic finish on high-end phones, as long as the paintjob doesn’t go scaly over time. That’s one of the big problems with the Galaxy S4’s design, many users complaining that the frame of the device looks awful even after just a few months of regular use. Samsung should indeed work on this aspect of design and choose metal frames like it did on the new Galaxy A and Galaxy E lines. Otherwise, the only worthwhile element in the design of the Galaxy S4 is the removable battery, which offers users the possibility of swapping batteries if necessary.

The HTC One M7 is what you might call premium, thanks to the high-end design and good build materials. The aluminum unibody of the handset allows for that cold feeling when you touch it, as long as you don’t use it much, because otherwise it will definitely show signs of heat and ever overheat sometimes. The chassis looks and feels premium and you won’t be having trouble with the paintjob on this one. The bezels on the device are a bit bulky for most users’ tastes, the Galaxy S4 looking better in this aspect. Nonetheless, the overall feeling of the phone is a mile better than on the Galaxy S4 and the front-facing BoomSound speaker grills look quite fashionable. As I’ve said before, the only design elements users tend to complain about is the thick bezels on the top and bottom of the device, which was ported a bit to the One M8, too. Hopefully, the HTC One M9 Hima will bring some improvements in design on March 1st, for when the release date is slated. 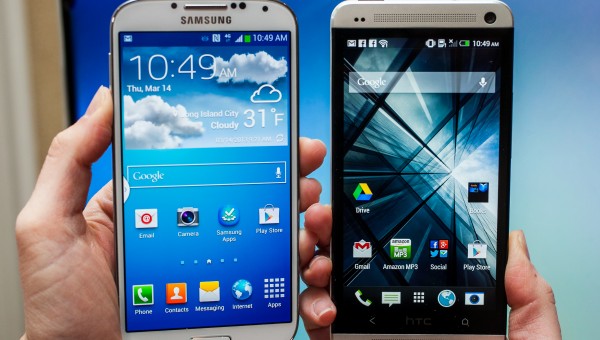 The display on the Galaxy S4 is pretty neat, and was one of the best at the time of its launch. You get a pretty nice Super AMOLED 5 inch panel with a 1080*1920 resolution, which adds up to a beefy 441 ppi pixel density. That resolution and pixel density offer for great viewing angles as well as outdoor visibility, not to mention crisp colors and amazing rightness levels The screen is protected by Corning Gorilla Glass 3, which is pretty scratch-resistant and your fingerprints won’t become bothersome with prolonged use. The screen to body ratio is also pretty nice, at 72,3 %.

The HTC One M7 boasts with a smaller Super LCD3 panel measuring 4.7 inches and with the same 1080*1920 resolution, adding up to an even higher 469 ppi pixel density. The higher pixel density and the high-end display offer a similar viewing experience as the Galaxy S4, but it does lag behind just a bit when it comes to outdoor visibility. Viewing angles are as great as on its competitor, but one drawback is Corning Gorilla Glass 2, a generation older. Even though it seems like enough protection for a smaller display, it does show signs of scratches earlier in its cycle of use. The One M7 has a lower body to screen ratio of 65 %, which puts the Galaxy S4 at an advantage. The smaller screen might also be considered a disadvantage since people are migrating towards larger and larger phones nowadays.

The Galaxy S4 was indeed one of the flagships of the year 2013, but it has become fairly outdated since. That is not a surprising evolution considering that OEMs are continuously improving hardware and software on their phones, Samsung included. Even though the handset used to be a flagship, the most we would call it nowadays is a mid-ranger bordering flagship specs. Still, its performance is worthy of mention and will hold out with most next-gen applications you throw at it. You get a quad core Snapdragon 600 CPU clocked at 1.9 GHz, backed by 2 GB RAm and either 16, 32 or 64 GB internal storage, expandable through a microSD card slot. The Adreno 320 is behind the graphics, and Android 4.4 KitKat comes out of the box. The Android 5.0 Lollipop ROM was just leaked for the Galaxy S4 and if you can get your hands on a discontinued GPe unit, you will get Android 5.0 Lollipop stat. While there’s no official word when the official OTA will be released to the Galaxy S4, it shouldn’t take long since its successor has already received the update in most countries over the world. 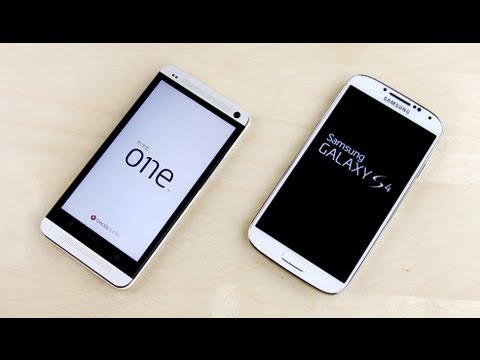 The HTC One M7 isn’t far behind when it comes to hardware and has roughly the same performance reports. TouchWiz makes things harder for Galaxy S4 users since the UI is sluggish and much too filled with bloatware and useless features. Sense 6 thrones above TouchWiz because it offers a smooth, fluid user experience and doesn’t lag around like Samsung’s counterpart. When it comes to hardware, the sheets say that the One M7 is a bit behind the Galaxy S4, sporting a quad core Snapdragon 600 clocked at 1.7 GHz and backed by 2 GB RAM and either 32 or 64 GB internal storage, without a microSD slot available. While we do like the addition of a microSD card slot on the Galaxy S4, we do appreciate Sense more than TouchWiz. Even though the CPU is just a bit better on the Samsung flagship, the HTC One M7 handles itself better. Android 4.4 KitKat and Sense 6 come out of the box, but those eager to try Lollipop have the same possibility as Galaxy S4 users: an unofficial stock ROM. Check out TouchWiz and Sense 6 in action in the UI comparison below.

When it comes to camera, both Samsung and HTC are know to be pretty generous with what they offer on the front and back of their handsets. Consequently, the Galaxy S4 comes with a 13 MP sensor on the rear equipped with an LED flash and a 2 MP front camera. The One M7 is just a bit behind in this respect with the 4 UltraPixel sensor on the rear, but the addition of optical image stabilization to the default LED flash adds an edge to the HTC flagship. While the 13 MP shooter on the Galaxy S4 is better at photos, the One M7 is better at videos. Low-light shooting isn’t shiny on either these devices, but overall, they take pretty high quality images. When it comes to recording video, the One M7 is ahead here thanks to the optical image stabilization. The Front camera on the One M7 is the same 2.1 MP sensor (almost) with the added benefit of HDR.

The Galaxy S4 flagship comes with a 2600 mAh removable battery unit which can make for a pretty decent battery life, thanks to Samsung’s power saving options available. The handset can hold out for 10 days if you have some sort of power saving mode activated, but with real-life use, it will barely make the 2 day mark. The One M7 has a smaller 2300 mAh battery and even though the difference is minimal, it still can be noticed by power users. The One M7 will not last two days, and won’t even get past the day if you are using it too much because it easily overheats and the CPU drains the battery life crazy. But, with average use, you do get a day and a half of battery life out of it. which seems like an acceptable performance. We would have liked better power management and no overheating problems, but alas, no phone can be perfect. 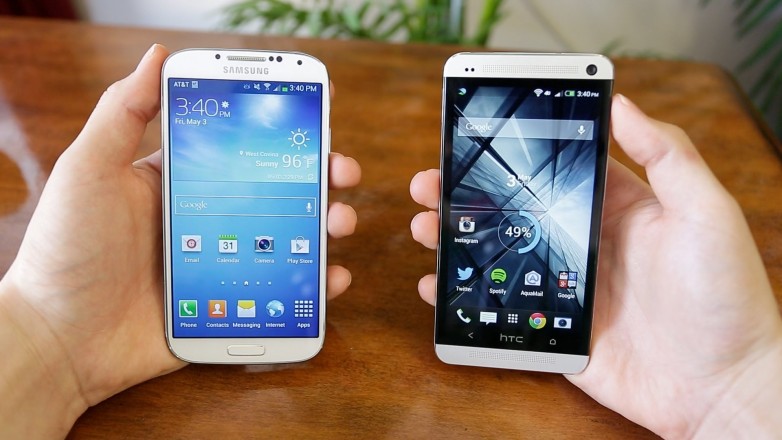 Last but not least, one of the most important aspects of a smartphone comparison is the price. Both the Galaxy S4 and HTC One M7 have dropped their prices a bit, because they are indeed a bit outdated in specs and design. Consequently, you can find the Galaxy S4 for as little as $340 off-contract, which is a pretty nice price for a once-great flagship device. The One M7 price unlocked is around $320, which is a similarly great price. If you want great deals, you can go for refurbished versions or used version, because you might get either of these phones for as little as $100, which would be a great steal. But is even that price worth it in the new era of smartphones that bring QHD displays and various biometric sensors to the table?

The Galaxy S4 and HTC One M7 are two flagships of yesteryear that are worthy of their fame and with the low prices you can get them for, they are certainly worthy of attention. Making a choice between these two is hard, indeed, but it comes down to two critical aspects: UI and display size. Processing power and battery life are largely the same, the cameras are average on both and their prices are pretty similar as well. TouchWiz is a pain, but the larger display on the Galaxy S4 is better than the 4.7 inch panel on the HTC One M7. Still, the design of the One M7 as well as the smoothness Sense 6 has to offer make the HTC One M7 the better choice with the better value, in my opinion. Aesthetics are important in a phone, and the Galaxy S4 is plain repulsive, especially after a few months of use. The HTC One M7 will look and feel the same way as it did when you bought it, even after you’ve used it for a year. Sense also offers a great user experience without the sluggishness of TouchWiz, but you have to make due with a smaller display. Which would you choose?

My life-long dream has been to test out every gadget on the market! Considering the fact that I've rapidly destroyed almost every gadget I've had so far, I'm not inclined to owning something, so my ideal outcome would be to have a different gadget each month. I'm really into smartphones, wearables and tablets and I love Playstation and Xbox, I'm sure I'll beat you at your own game (after a month of training... or two)
Previous LG G Flex 2 vs LG G4 – Korean tech at its best
Next Tom Jubert FTL writer working on new game