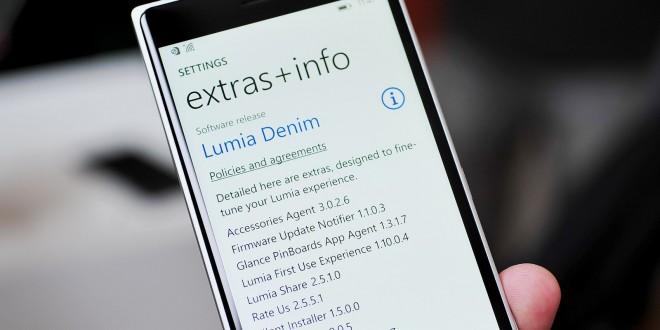 The Lumia Denim Update has begun its global rollout

Lumia Denim update rolling out for all

The Lumia Denim update rollout is similar to the Android 5.0 Lollipop one because Microsoft announced that it would be released in stages in batches. While many aren’t really happy to hear that, at least most Lumia devices are now benefiting from the update. First, the Lumia Denim update started rolling out in December 2014 to a limited number of devices, Microsoft stating that the rollout would expand soon.

As a new week kicks off, Microsoft has announced that the Lumia Denim update is rolling out worldwide, to the joy of many Lumia owners with Windows 8.1 out there. Some newly launched Microsoft Lumia devices come with the update out of the box, such as the Lumia 435 and 532, but older devices are in need of the new features, too.

Consequently, Microsoft announced that Lumia Denim is now going out to all owners who are running Windows 8.1 on their phones. Even though Denim brings quite a lot to the table, not all the features within are available to all phones that receive the update. That shouldn’t be frowned upon, though, because the most affected feature is the new Lumia Camera app. If you don’t have the hardware, the app won’t be necessary for you. Thus, only owners of the Lumia Icon, Lumia 1520, Lumia 930 and Lumia 930 will be awarded the Lumia Camera app within the update. Check out Pocketnow’s tour of the Lumia Camera application.

Otherwise, the Lumia Denim update brings forth a handful of improvements. Cortana is updated and users of the Lumia Icon, Lumia 1520 and Lumia 930 will be able to use the “Hey Cortana” voice activated function. Otherwise, you can now create folders with Live Folders, which may come in handy for those of you who have a ton of apps and can’t manage to organize them effectively. The update also includes an updated Glance Screen which can sung with MSN Health and Fitness to provide with activity summaries, as well as show other lock screen content.  Even though there aren’t a lot of Internet Explorer fans out there, the mobile browser is improved in Lumia Denim. You can check Microsoft’s lists of update availability grouped into regions if you haven’t received the update yet.

My life-long dream has been to test out every gadget on the market! Considering the fact that I've rapidly destroyed almost every gadget I've had so far, I'm not inclined to owning something, so my ideal outcome would be to have a different gadget each month. I'm really into smartphones, wearables and tablets and I love Playstation and Xbox, I'm sure I'll beat you at your own game (after a month of training... or two)
Previous GTA 5 PC pre-orders grant a free game of choice courtesy of Rockstar
Next Sharp launching two new interesting Aquos phones