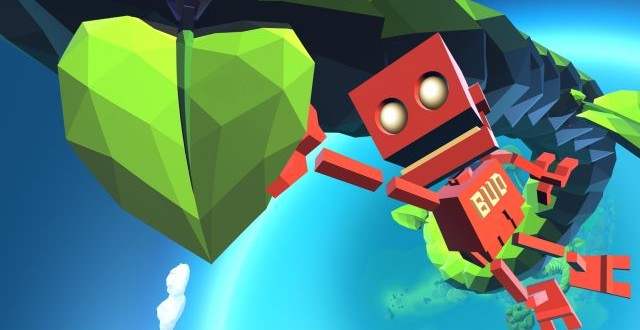 In an announcement that came as a surprise to many, Ubisoft unveiled their latest game produced by a small team of 8 at Reflections, one of the company’s studios, and coming to PC during next month. Described as a “Journey to the Stars”, Grow Home will put the player into BUD’s shoes. BUD is a robot, a Botanical Utility Droid with a mission: finding a new plant to export to its planet of origin in order to help oxygenate it. He finds the his objective in the Star Plant and his mission  becomes to grow this beanstalk-looking tree and harvest its seeds.

While controlling the droid, players will help the plant growing as they are climbing to its top. The game allows players to “steer” the plant in order to give it the shape they prefer and reach secret areas such as floating islands and unexplored zones of the planet. As producer Peter Young says, “Grow home has been designed to be used with a controller”. This is due to the fact that BUD has the ability to push, pull and grab onto objects and players can control its arms and hands separately as the controls are mapped to the left and right triggers. This makes interaction, and especially climbing, a more realistic experience; as BUD can grab onto different surfaces and a little error can result in a long fall toward the ground.

Here is where tools come in handy. Scattered throughout the world of Grow Home, players will be able to find tools and bonuses to be used to help them on their quests for the Star Plant seeds. Accessories such as the flower parachute or teleportation pads will allow players to move faster in the world or avoid an horrifying death. Grow Home is a passion project, born as an experiment, but also a testimony of the results of Ubisoft giving a higher degree of freedom to their studios. During its development, different component of the team with different degrees of ability worked together side by side to transform what had been born as a toy into a polished and complete game. A  trailer of the game can be found below.

Grow Home and BUD will land on PC on February 4, although there is no information as to whether the game will be playable on consoles or not.

Alessandro is a languages and literature student and gaming enthusiast. Long hair and a bushy beard, he spends most of his time on romantic dates with fascinating old tomes. In his free time, he follows and comments the gaming community while playing games. You can follow him on twitter to see what he's up to.
Previous Class Action Lawsuit Settled With Sony – Are You Entitled To Benefits?
Next Xperia Z2, Z2 Compact and Z prepping for Android Lollipop update