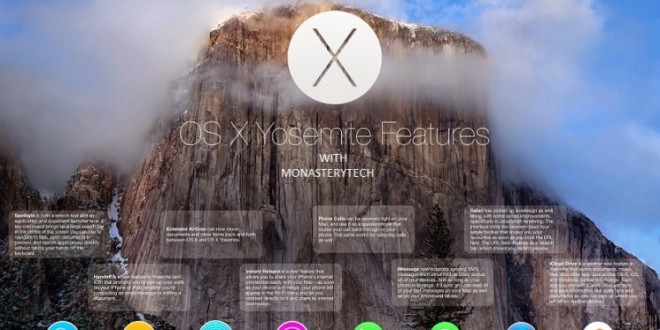 Apple today started sending out a new update to OS X Yosemite, bringing the version number up to 10.10.2. Supposedly, the update will bring improvements to overall system stability, as well as considerable amount of fixes to issues users have been having with Wi-Fi, slow internet speed, improvements to VoiceOver, iCloud, Time Machine and many more. There aren’t any security fixes within the update from what we can tell, but you can fill us in on that after you’ve received the update.

First off, you should check for updates in the Mac App Store and install all the latest updates available for your OS X Yosemite before installing the latest one, as having all the updates increases performance and system stability. As with any update on any OS, you should always back up important data, since there are many things that can go wrong during an installation. Unforeseen power-outages or crashes might destroy your data and OS X Yosemite installation process, so always take backing up data into consideration.

The weight of the OS X Yosemite update varies depending on device, as per Apple. This is definitely a good OS X Yosemite update release, as it has a long change log and fixes many issues users have been complaining about in forums, though not all of them. Once installed, the update should resolve any issues you have had with random disconnects from Wi-Fi, as well as slow loading times on certain websites in Safari.

The most important part of the update is the Spotlight improvements, because the service had a vulnerability that unveiled personal information to third parties in search results. According to Apple, this Spotlight vulnerability is now fixed, so you won’t have to worry about your email address or other sensitive information showing up in search results within Spotlight. If you had had problems syncing a Bluetooth headphone with OS X Yosemite, the update should fix that, too. It also promises to improve audio and video sync when using Bluetooth headphones.

The OS X Yosemite update also adds a a new feature to Time Machine: the ability to browse iCloud Drive. At the same time, it should also improve stability and security in Safari, as well as improve VoiceOver speech performance. That means that if you’ve had an issue when VoiceOver would echo characters when entering text on a page, it should be fixed by now. The update also fixes an issues that causes the input method to switch languages out of the blue. Now that’s one problem we haven’t encountered in OS X Yosemite, how about you?

My life-long dream has been to test out every gadget on the market! Considering the fact that I've rapidly destroyed almost every gadget I've had so far, I'm not inclined to owning something, so my ideal outcome would be to have a different gadget each month. I'm really into smartphones, wearables and tablets and I love Playstation and Xbox, I'm sure I'll beat you at your own game (after a month of training... or two)
Previous Hyrule Warriors Ships 1 Million Copies Worldwide
Next Reptile Returns in Mortal Kombat X