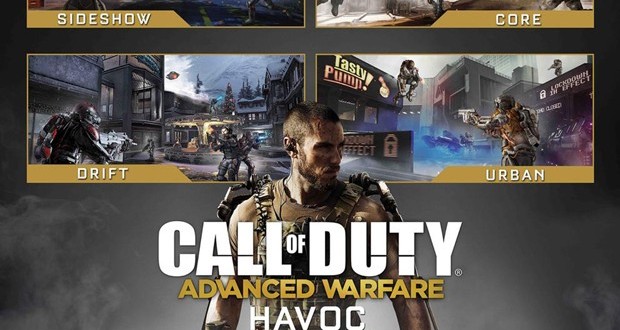 A rundown of what you can expect from the Havoc DLC pack for Call of Duty: Advanced Warfare.

Call of Duty Advanced Warfare was just released back in November, but that hasn’t stopped Sledgehammer Games and Activision from rolling out new content for Xbox 360 and Xbox One. Are you still in the midst of dealing damage with your exoskeleton while hanging out with Kevin Spacey? Don’t worry, Call of Duty Advanced Warfare’s Havoc DLC promises to shake things up so that you can make the most of your futuristic arsenal without getting tired of the gameplay. Everyone knows that the bread and butter of the CoD franchise are the multiplayer battles, and Call of Duty Advanced Warfare is no exception. The Havoc DLC pack will come with four brand spanking new multiplayer maps for you to test your mettle against other CoD Advanced Warfare fans. These maps feature diverse landscapes from deserts to futuristic cityscapes that promise to keep co-op fans racking up the kill counts for hours to come.

Horror genre fans will appreciate the Exo Zombies that you’ll get to meet and kill when playing the Havoc DLC. If you’re super into the storyline for Call of Duty Advanced Warfare, you’ll be happy to hear that I kept this as spoiler free as possible. (Though, it wasn’t too hard since the gist for zombie creation stories all pretty much variations on the same theme.) Anyway, a futuristic DNA bioweapon somehow malfunctions (surprise!) and infests a secret Atlas research lab with, you guessed it, zombies! The Call of Duty Advanced Warfare Havoc DLC will feature co-op and single player battles against these futuristic zombies as you try to survive using your wits, and of course, your exoskeleton.

While playing through Call of Duty Advanced Warfare, did you find yourself thinking that you really, really enjoyed hearing Kevin Spacey’s velvety voice accompany your futuristic battles? I have great news for you then! You can enjoy the dulcet tones of the even more celebrities as you play through the Havoc DLC pack! You’ll have to try and survive the rampaging horde of Exo Zombies with the likes of John Malkovich, Rose Mcgowan, Jon Bernthal, and Bill Paxton. In addition to all new maps, things to kill, and celebrities, you’ll also get access to new weaponry when you purchase the Havoc DLC pack. Are you playing Call of Duty Advanced Warfare on PlayStation or PC? Well, I’ve got some bad news for you. So far Activision has not yet revealed when you can get your hands on the Havoc DLC pack.

I’m Load The Game’s co-founder and community manager, and whenever I’m not answering questions on social media platforms, I spend my time digging up the latest news and rumors and writing them up. That’s not to say I’m all work and no fun, not at all. If my spare time allows it, I like to engage in some good old fashioned online carnage. If it’s an MMO with swords and lots of PvP, I’m most likely in it. Oh, and if you’re looking to pick a fight in Tekken or Mortal Kombat, I’ll be more than happy to assist! Connect with me by email markjudge (@) loadthegame.com only
@@MarkJudgeLTG
Previous Reptile Returns in Mortal Kombat X
Next The Witcher 3 to Have 16 Free DLC Packs