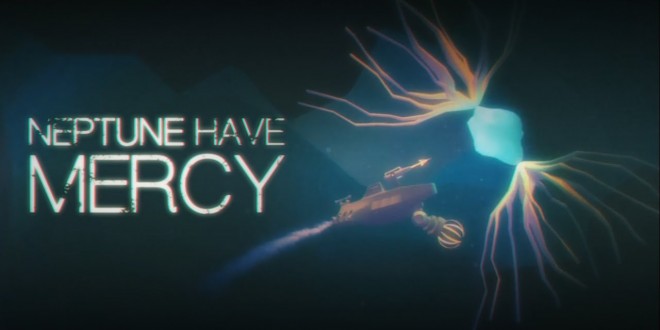 Neptune, Have Mercy, now on Kickstarter and Steam Greenlight!

Octopodo and Progpixel’s submarine roguelike, Neptune, Have Mercy is finally up on Kickstarter and Steam Greenlight! Originally conceived in February of last year by creators Jarred McKenna and Tristan Nishimoto, Neptune, Have Mercy promises a procedurally-generated adventure that is “Insanely Twisted Shadow Planet and Ecco the Dolphin meet FTL with a splash of Metroid.” In it, you explore the undersea depths of an alien world. Neptune, Have Mercy‘s retro 80’s groove also draws influence from films such as John Carpenter’s The Thing and James Cameron’s The Abyss.

Gameplay in Neptune, Have Mercy is simple: it centers around using your submarine to navigate the procedurally-generated areas, collecting samples and fighting enemies as you go. Much like any other roguelike, you will never play the same dive twice, fighting off alien creatures with a variety of weapons and finding customizable upgrades for your vessel. By talking with your crew members you can go on quests, as well, which add extra rewards. Neptune, Have Mercy is  playable with both a keyboard and a gamepad, accommodating to all tastes. Atmospheric music accompanies each descent, composed by Gunpoint composer John Robert Matz.

The Kickstarter’s final goal is to reach $20,000 in 30 days. Many options are available for pledgers, ranging from a $15 pledge that earns you a digital copy of Neptune, Have Mercy, to a $2500 limited pledge where you can design your own boss for the game. Other goodies include a soundtrack tier, the option to create a weapon of your own design, and even the opportunity to create one of the organizations within Neptune, Have Mercy‘s world. Some of these tiers are limited, however, so they will only be on a first-come, first-serve basis.

Neptune, Have Mercy is set for a mid-2015 release for PC, Mac, and Linux systems. For more information, visit their Kickstarter page, their official Homepage, the project’s IndieDB page, and their Steam Greenlight page.

For a taste of what is to come, you can see Neptune, Have Mercy‘s trailer here: