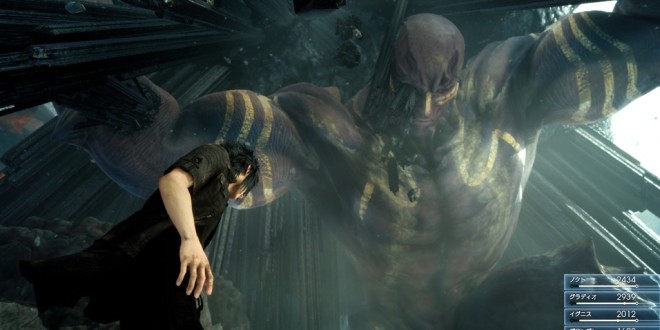 Yesterday at the Taipei Game Show, director of Final Fantasy XV Hajime Tabata announced a partnership with XPEC, a Taiwanese development firm. Tabata explained that the outside help was required for finishing the game, since the latest installment of the famous franchise was such a “large scale project.”  Alongside Tabata onstage, XPEC CEO Xu Jinlong and Chairman Aaron Hsu expressed their excitement on being included in the development process.

XPEC is apparently working mostly on the second half of the game, and was therefore unable to show off much of their work. However, XPEC was involved in the demo for the new location showcased at the same time. The not-quite-finished train station environment was first shown from protagonist Noctis’s point of view before switching to control of a cat. The animal theme of showing new locations continued from the use of a dog cam to show the town of Restarg at Jump Festa in December. The new cat cam video was apparently the joking idea of XPEC. It’s at least step up in terms of completely exploring a location, since cats can get to many places that a dog can’t.

XPEC is not the only outside help that has been recruited by the developers of Final Fantasy XV. As reported by Nova Crystallis, producer Shinji Hashimoto publicized Wan Hazmer, a Malaysian, as a lead game designer for open environments in the game at the last Comic Festa in Malaysia in December. Perhaps this could be an attempt to garner some local publicity in different parts of the world to go along with Final Fantasy XV’s possible simultaneous worldwide release.

With all the outside help pouring in, it might not be too far of a stretch to say that the game is closing in on its finishing touches. The new Final Fantasy has been in development for seemingly ages. Hopefully, we’ll see a finalized release date sometime in the near future.

Emma is an aspiring something-or-other with a love for video games fostered since childhood. She is more prone to rage-quits than she would like to admit. In her spare time, she runs her own blog and writes creatively.
@back_Paq_ing
Previous Bravely Second Showcases Characters in New Trailer
Next LEGO Announces LEGO Avengers and LEGO Jurassic Park Video Games

Thanks to the Final Fantasy 7 Remake that released in April, the beloved RPG from ...