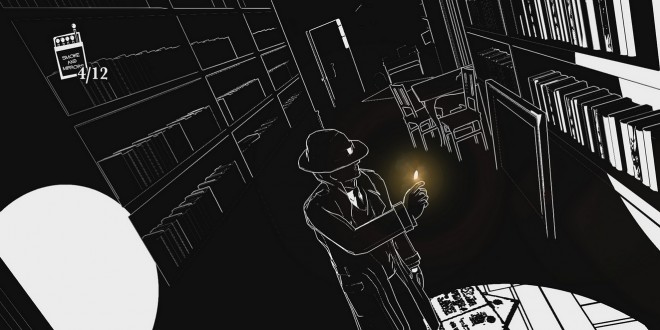 Sony has just announced an old school survival horror adventure for the PlayStation 4. White Night is set in 1930’s Boston. It’s late, you’re heading home. You get into a car crash and need to find a place to stay. There’s only a deserted mansion nearby. Find your way through it with only a few sources of light illuminating the way in this black-and-white puzzle title with a film noir look.

“We hunted for inspiration wherever we could find it. We listened to jazz music from the era. We drew from the bold look of black-and-white cinema, not only to define White Night’s art style, but to create a chilling game world in which scarce sources of light are the only ways to reveal your surroundings. We even went so far as to rent a real-life mansion in Normandy, where we stowed away for a week to talk about the game, take pictures of the architecture and, most importantly, steep ourselves in the setting. We wanted to get it all right.” – an excerpt from the PlayStation Blog post

The game’s developer, OSome Studio, revisits some of the classic themes from amazing horror titles, like the original Alone in the Dark, including “mature storytelling, strong characters, compelling environments and equal respect for tension and terror.” White Night will be arriving on the PlayStation Store on March 4th for £11.99/€14.99.

The founders of OSome Studio met at Eden Games while working on the fifth installment in the Alone in the Dark series. Once the project was finished they went their separate ways, however “there was always the feeling of ‘what if’ in the back of our minds.” They came together to create OSome Studio after working on ‘blockbuster’ titles for a few more years after that. The studio is based around the founding trio: Domenico Albani (technical director), Ronan Coiffec (creative director) and Mathieu Fremont (head of production).

Sony’s current generation console launched in late 2013. It has been an amazing success story since then. The PS4 is the fastest-selling console in the history of the industry. It has proven to naysayers that the video game console is far from dead. The PS4’s success can be attributed directly to Sony’s renewed focus on core gamers. This focus includes indie titles. The company has helped many indie developer and publishers release their games on the console.

I'm a gamer and a massive fan of anime. I'm a massive simulator geek. Who isn't? Simulators offer me the opportunity to experience something I wouldn't otherwise. Have you ever driven a train? I haven't, and I probably never will. However Train Simulator 2015 gives me the opportunity to experience what it might be like. I'm also a big train and space exploration geek.
@ivanmashkov
Previous Bayonetta Goes 8-Bit in a New Browser Game
Next Bravely Second Showcases Characters in New Trailer