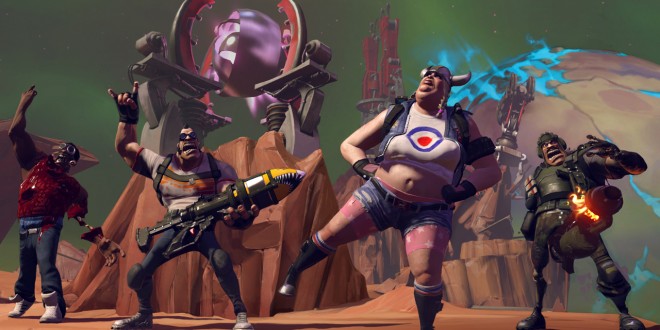 If Loadout were a person, it’d be that one friend you never want to be seen in public with, but who tells the most vulgar, laugh-out-loud jokes imaginable. As it stands, “Loadout” isn’t a person (thank goodness), it’s a free-to-play, third-person, multiplayer shooter with a heavy focus on character and weapon customization. Stop me if you’ve heard that before. What sets “Loadout” apart is that it’s a game that oozes ‘tude. Some might say too much ‘tude, but they’d be wrong, because you can choose to taunt your enemies by twerking, thus rendering any arguments invalid.

I recently had a little time to dig into the PlayStation 4 version of Loadout, having skipped the Windows PC version, which launched in January of last year. Once I’d worked out the obtuse introduction, I was pleasantly surprised by the quality of the core gameplay. As noted by Load The Game’s own Jacob Chambers in his review, the graphics and basic weaponcrafting are good fun. That said, I just couldn’t shake the feeling that I was playing a game that wasn’t quite finished. It felt like I was playing a very polished Early Access game. Thankfully, it sounds like developers, Edge of Reality are gearing up to release a boatload of content in February that should change things.

In an interview with GamingBolt, Edge of Reality community manager, Jason Heitman laid out what sorts of updates PS4 gamers can expect next month. Of most interest to new players will be the fact that the team is working on a new, four player story mode that’ll help introduce you to the game.

“Our team is working on building a story that fits into the why and how of the Loadout universe. Regardless, the main objective is to build in a natural progression that revolves around a story that prepares you for Arena. That could include boss battles, special modes that allow for progression over a match and more. Just depends on what we’re able to pull off while balancing the feature set for Arena and other parts of the game.” said Heitman in the interview.

Hetiman went on to explain that the February update, called “Phase One”, will see three new maps added to the PS4 game. Phase One will also see Loadout on PS4 upgraded to support 60 FPS gameplay. He also explained that due to the studio’s limited manpower, the update would hit PS4 first, and then be rolled out to the PC down the line.

Closing out the interview, Heitman leaves the door open for Loadout, which is currently a PS4 console exclusive, to appear on Xbox One. He stated however, that the studio is “happy with the opportunity Sony has provided us with the PlayStation 4 and want to provide as much as we can for that PS4 player base.”

Hardcore gamer by day, comic book writer and professional heavy sleeper by night. I love videogames and I'll try almost any genre once. Unless it requires lots of time and effort, then I'll probably zone out. I started on the NES and cherish those early Nintendo memories, but I tend to call PlayStation platforms home now. Also, Star Trek TNG rules.
@@shobocoker
Previous Monolith Seeking Indie Developer
Next Get an iPhone, iPad and unlimited data plan for $100 a month