Which is the better Lollipop phone: Nexus 6 or Nexus 5?

The Nexus 5 and the Nexus 6 are two of the most well-received smartphones on the market, mostly thanks to the fact that they are both stock Android smartphones. Now, they are getting more and more popular with the rollout and launch of Android 5.0 Lollipop. The Nexus 6 comes with Android Lollipop out of the box, so you won’t have to fiddle with large software updates the moment you start the phablet up, but you will have to perform smaller updates as time goes by. The Nexus 5 comes with KitKat, but you can update the device to Android 5.0.1 Lollipop through an official OTA, which is neat.

Since both these phones are representative of the pinnacle of software and hardware from Google, Motorola and LG, let’s see how they size up next to each other. If you’re the owner of a Nexus 5, you might be pondering a Nexus 6 acquisition, especially since Lollipop is still quite buggy for some people on the Nexus 5 and other older Nexus models. The Nexus 6 has its own quirks, like the pink display at low brightness, but overall it is a smoother and more future-proof device. But is the Nexus 6 worth the considerable price bump compared to the Nexus 5?

The Nexus 5 is obviously the smaller and older phone and it caters to fans of smartphones that can actually be used with one hand, while the Nexus 6 is nearly impossible to use with just one hand because it’s quite the behemoth compared to other phones on the market. The Nexus 5 on the other hand, is a comfortable phone, there’s no other way of saying it. It’s not too small, but it’s not too big and many say that it’s just the perfect size for the average smartphone user. The best way to assess how big or small a smartphone is is by taking a lot at exact measurements. The Nexus 5 measures 137.9*69.2*8.6 mm, while the Nexus 6 measures 159.3*83*10.1 mm. That’s a pretty big difference that encompasses all kinds of measurements here. The Nexus 6 is essentially a huge Moto X, so its got a thicker body, especially at the top. The curved body won’t allow a stable placement on a flat surface, which means that you probably won’t be able to text with the phone laying flat on  a table or something. The Nexus 5, on the other hand, is a symmetrical, thinner phone that won’t wobble like the Nexus 6 does.

The bezels on both these devices are pretty thin compared to other smartphones on the market, so their appearance overall is pretty attractive. Still, they both share an interesting feature in this category: their bottom bezels – chins – are thicker than their top bezels – foreheads. The button placement on the Nexus 6 also differs from the Nexus 5, as the buttons have been brought down to the middle of the phone so that you can actually reach them. The front facing speakers on the Nexus 6 are also much better than what you’d find on the Nexus 5 or the Motorola Moto X for that matter, but they do prevent you from laying the device down flat on its display, too. Overall, both designs are good, but if you want to be able to use a phone with one hand, the Nexus 6 shouldn’t be your next flagship. 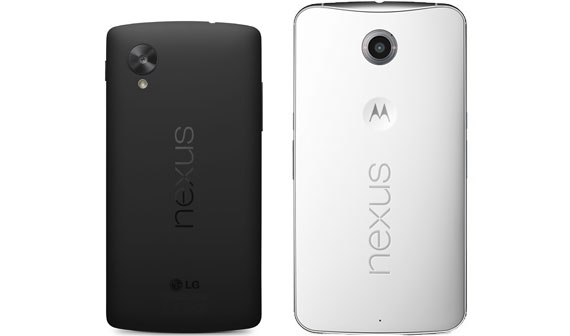 The display is the main attraction on the Nexus 6 and you notice the high quality of it from the first time you start the phone up. That’s because you get a massive 5.95 inch AMOLED display on the behemoth, which comes with a QHD resolution of 1440*2560, which adds up to a staggering 493 ppi pixel density. In comparison with the Nexus 5, which comes with a 4.95 inch True HD IPS+ display with a 1080*1920 resolution (445 ppi pixel density), the Nexus 6 seems like a beam of light, unless you turn the brightness down. When you do that, the display on the device will actually turn a bit pink, which is because the overwhelming amount of white found in Material Design can’t change brightness correctly and results in inaccurate color reproduction. When you put the devices side by side, you won’t notice too much of a difference, as the human eye can’t really discern at such a high ppi, but you can still figure out that the Nexus 6 display is of higher quality, offering up brighter, crisper colors. If you stay away from the lowest brightness settings, you won’t even notice the problems it has.

The Nexus 5, since it’s an older device, comes with older hardware. That doesn’t mean that performance suffers. The Nexus 5 comes with excellent performance and a decent battery life, so you definitely shouldn’t be disappointed in it. Still, Android Lollipop isn’t doing too well on the device just yet, but we’re not far from the fixes it needs so that the Nexus 5 can once again work flawlessly. You will get the occasional battery drain, some app crashes and some sluggish performance once in a while, but it depends on the device, as not every Nexus 5 owner is having trouble with Android Lollipop.

The camera on Nexus devices is known for being sub-par, although above average. Expectations are always high when it comes to Google and Nexus, so that might have contributed to the poor opinions about the Nexus 5 camera. Still, it takes decent shots, but nothing to write home about. You get an 8 MP sensor on the rear with an LED flash and optical image stabilization, which helps with video recording a bit. The front camera is a 1.3 MP shooter, which doesn’t quite perform as well as it should. The Nexus 6 camera is the same as on the Moto X, a 13 MP camera with LED flash and optical image stabilization. The camera is definitely better than on the Nexus 5, but the photos it takes still don’t warrant an A+ grade. The software needs a bit of an improvement in the tap to focus category, but overall, the camera does a good job at taking high-quality photos. The front camera is still not that great, measuring 2 MP. You don’t have HDR in the Nexus 6, but you do get 4K recording, so that’s pretty nice.

Both the Nexus 5 and the Nexus 6 come with Qi wireless charging, but if you own a Nexus 5 or a Nexus 5 wireless charger, you probably won’t get it to work with the Nexus 6, which means you’re going to have to get a dedicated Qi wireless charger for it, which means extra investment. Now the battery life on the Nexus 5 is pretty neat, as it can get you through a day and a half of mixed use with its 2300 mAh battery. The Nexus 6 doesn’t impress that much in this department, which isn’t surprising as QHD panels tend to use up a lot of power with average use. You’re going to get about 3-3 and a half hours of on-screen time with the phone, but it will last you through the day with mixed use. That’s not really admirable, but a few software updates should improve upon that in the future.

Since price is a crucial part in a smartphone comparison, you are probably aware that the Nexus 5 is definitely cheaper. You can get your hands on a black Nexus 5 with 32 GB internal storage directly from the Google Play Store at the moment, for $400, which is a pretty good price for a flagship device. The Nexus 6, on the other hand, is much more expensive than that, as the 32 GB version will set you back around $750, and the 64 GB version will go up as high as $1000. That’s quite the price to pay for a smartphone, especially a Nexus one.

Considering the fact that the Nexus 6 packs a lot of punch, it’s certainly a worthwhile phone, but the pricing seems just a bit off in our opinion. A $700 price tag would have been better for the base version unlocked, but it still is a bit expensive since we’re used to Nexus devices being just a bit more affordable. The Nexus 5 is one of the few devices on the market, besides the OnePlus One, with excellent bang for buck, so our vote goes to the older model this time. Even though the Nexus 6 brings forth a lot of neat features, it just hasn’t arrived at a point were people can really make use of that huge QHD display. That’s why the Nexus 5 is the better investment for the average smartphone user. Naturally, if you’re a 4K fan, have a lot of videos to watch and games to play and have the cash on hand, the Nexus 6 is still a good investment.

My life-long dream has been to test out every gadget on the market! Considering the fact that I've rapidly destroyed almost every gadget I've had so far, I'm not inclined to owning something, so my ideal outcome would be to have a different gadget each month. I'm really into smartphones, wearables and tablets and I love Playstation and Xbox, I'm sure I'll beat you at your own game (after a month of training... or two)
Previous The Order: 1886 Will Contain Brothels, and Boobies and Viscera, Oh My!
Next Here’s The First Trailer For Dark Souls 2: Scholar Of The First Sin