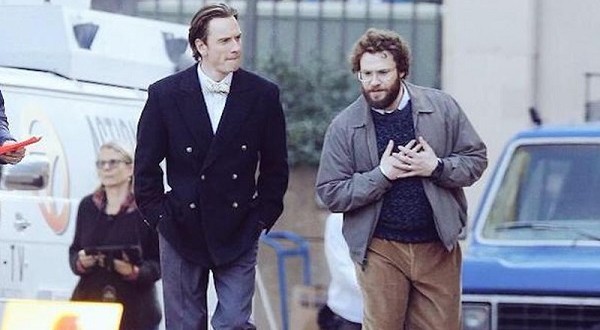 Steve Jobs movie will feature Fassbender and Rogen as leads

Steve Jobs, the movie, is currently in production and we finally have confirmation about who will play who in the controversial movie. Steve Jobs was scraped and restarted various times as several actors were selected for the lead, some of them passing up the role while others left the production for whatever reasons. Now, on the scenes images have surfaced on Twitter showing Michael Fassbender and Seth Rogen talking, walking and feeling things, as they are the two new leads in the upcoming biographical drama movie.

Steve Jobs, founder of Apple, is a revered and acclaimed personality in the world of technology, as he brought us the first iPhones and iPads and has influenced the world into loving Apple and all that it stands for. The Steve Jobs movie is finally en-route and it seems like we will be in for a treat with the cast. Michael Fassbender will be Steve Jobs, Seth Rogen will be playing Steve Wozniak and Kate Winslet is going to be Joanna Hoffman. 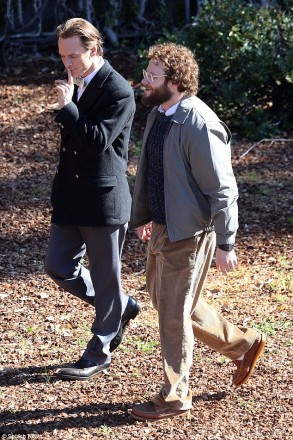 Filming for the production of Steve Jobs has begun last month and we are looking forward to seeing how the influential business man will be portrayed. We love Seth Rogen and Michael Fassbender, but we wonder how good a team they will make on the set. We were surprised to see Seth Rogen as Steve Wozniak, but most people think he might just be the perfect pick for the role. The Steve Jobs movie should premiere in 2016, directed by David Boyle, based on the biography written by Walter Isaacson. The screenplay is written by Aaron Sorkin, the man behind The Social Network and A Few Good Men.

An official release date for Steve Jobs is not yet set, we only know that it will be finished in 2016. We hope the cast remains the same as many are excited about seeing Fassbender’s portrayal of the Apple CEO. Seth Rogen is certainly able to pull off box office, but how well can he pull off Steve Wozniak, the genius. In any case, we’re looking forward to seeing Steve Jobs next year.

My life-long dream has been to test out every gadget on the market! Considering the fact that I've rapidly destroyed almost every gadget I've had so far, I'm not inclined to owning something, so my ideal outcome would be to have a different gadget each month. I'm really into smartphones, wearables and tablets and I love Playstation and Xbox, I'm sure I'll beat you at your own game (after a month of training... or two)
Previous AdBlock Plus users will still get ads from Microsoft, Google and Amazon
Next Apple stores turning into jewelry stores

The Interview will stream online starting this morning according to various reports online. Sony famously ...