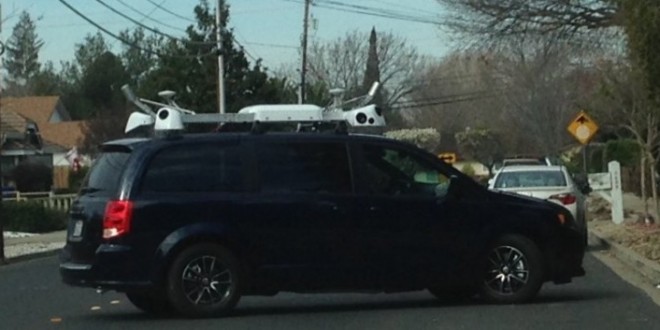 Apple Maps to get a Street View feature soon?

Apple Maps is definitely far from being as good as Google Maps or Nokia Here maps, but it seems Tim Cook and co. are working on making the service much better in the future. An Apple vehicle was spotted in the streets of California this week, and it looked like it was doing what Google cars do: driving around, filming the streets slowly. The Apple vehicle seemed to be equipped with various cameras on the top as well as a so-called LiDAR system, used in self-driving vehicles.

Apple Maps might be improved in the future, as the company is working towards popularizing its mapping/navigation service constantly, and a Street View feature would be more than welcome as an addition. Some are speculating that the Apple car seen in the streets is actually part of Apple’s own self-driving car experiment, due to the presence of the LiDAR system. Even though mapping the streets for Apple Maps seems like a more likely purpose of the black Apple car seen in California, we can’t exclude the possiblity that the Cupertino-based company is working on its own self-driving vehicle.

Adding Street View to Apple Maps would help users be more familiarized with the application and give them more features to use within the application, so our opinion is that the Apple car is most likely either filming the streets for the new feature or just plain improving the navigational system for the Apple Maps application. Since we can’t be sure which of the three options it is, because Apple hasn’t said anything about either, we’ll go with the possibility of all three. That means that we could either see an update coming to Apple Maps in the future containing either improved maps or Street View, or we might be confronted with a new Apple self-driving vehicle. Whichever the case may be, Google needs to stay focus, as Apple might be planning to steal the spotlight. What do you think?

My life-long dream has been to test out every gadget on the market! Considering the fact that I've rapidly destroyed almost every gadget I've had so far, I'm not inclined to owning something, so my ideal outcome would be to have a different gadget each month. I'm really into smartphones, wearables and tablets and I love Playstation and Xbox, I'm sure I'll beat you at your own game (after a month of training... or two)
Previous Sims 4 Expansion Details Leaked
Next Battlefield Hardline May Get Premium Service

Google Street View takes you to the World Cup 2014