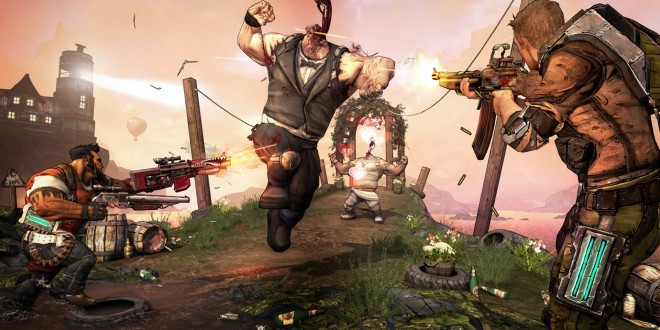 Even with Borderlands: The Handsome Collection given a release date of March 27 for PlayStation 4 and Xbox One, it’s hard not to want some fresh Borderlands content. It looks like the series will be giving us just that with a brand new installment sometime in the future.

This announcement was released in tandem with a report for Take-Two Interactive’s fiscal third quarter which showed strong results for the company. The Borderlands 3 news comes straight from Karl Slatoff, president of Take-Two Interactive who confirmed the project in an analyst call about their earnings of the quarter. Take-Two also confirmed that they would be publishing the game through their 2K Games subsidiary upon its release. However, they are not ready to give any sort of release schedule.

This probably means it’s not even in development yet, but it is just nice to know that its existence is assured. Unsurprisingly, given that the release date is most likely far in the future, Borderlands 3 has also been confirmed as exclusively nest-generations. No more PlayStation 3 and Xbox 360 backwards development.

Borderlands 3 would be the fourth game in the series following Borderlands, Borderlands 2, and Borderlands: The Pre-Sequel. Telltale also released a fifth console game with their Tales from Borderlands. Developer of the series Gearbox is also working on a new project outside of Pandora called Battleborn. This will be next-gen and PC and is targeted towards shooter and action games fans- similar to the Borderlands player base. Gearbox itself describes the new project as an “ambitious fusion of genres.” There is currently no release date.

Emma is an aspiring something-or-other with a love for video games fostered since childhood. She is more prone to rage-quits than she would like to admit. In her spare time, she runs her own blog and writes creatively.
@back_Paq_ing
Previous Darkest Dungeon is Steam’s top-selling game
Next You can now buy RISK for your PS4 and Xbox One