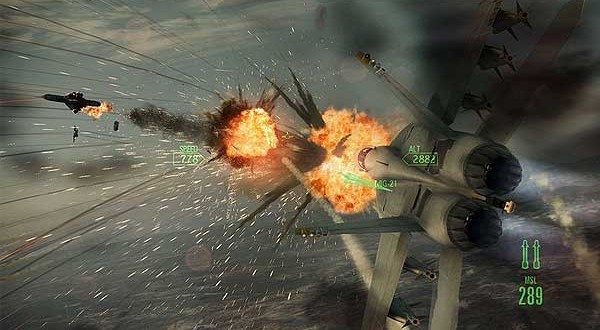 In a press release today, Bandai Namco Games UK revealed more information on the amiibo functionality of the New 3DS port of Ace Combat Assault Horizon. Using amiibos with Ace Combat Assault Horizon Plus will unlock character-theme skins for certain aircraft, such as the F-22 or the A-10A. Additionally, the publisher also announced the European release date of the game: Friday, February 13th.

The New 3DS models’ built-in NFC (Near Field Communications) sensor allows for Ace Combat Assault Horizon Plus players to place an amiibo on top of the handheld’s bottom touchscreen to access exclusive skins unlocked by the individual amiibo itself.  For example, a Mario amiibo will unlock a Mario-themed F-22 skin, while a Bowser amiibo will unlock a Bowser-themed skin for the A-10A. Compatible amiibos will be tied to a specific aircraft, so players apparently won’t be able to user Bowser to unlock a skin for the F-22.

It’s implied that additional amiibo-exclusive skins include ones unlocked by Donkey King, Zelda, Captain Falcon, Samus and even PAC-Man. If players have either one of these amiibos, they will be able to unlock their respectively tied skins as early as when the game launches, which releases in conjunction with the New 3DS models themselves. The press release didn’t specify which aircraft these amiibos in particular are tied to. However, included screenshots reveal that the Captain Falcon amiibo is tied to the F-16C, while Samus and PAC-MAN are tied to the YF-23 and the F-22 respectively.

During Nintendo’s first Nintendo Direct of the year in January, it was announced that the New 3DS re-release of Ace Combat Assault Horizon would include amiibo support. This new version of the game will make use of the new hardware’s ZR and ZL buttons, along with the new C Stick nubbin. Ace Combat Assault Horizon Plus’s Friday, February 13th release date place it up against other New 3DS launch titles, such as The Legend of Zelda: Majora’s Mask 3D and Monster Hunter 4 Ultimate.

Preferring to be referred to as "KingSongbird", Kieran is a serious, yet laid-back person with a particular soft spot for RTS games and anything Sci-Fi.
@KingSongbird
Previous More Theatrhythm DLC Comes to Curtain Call
Next Compile Heart Countdown Site Teases New Title