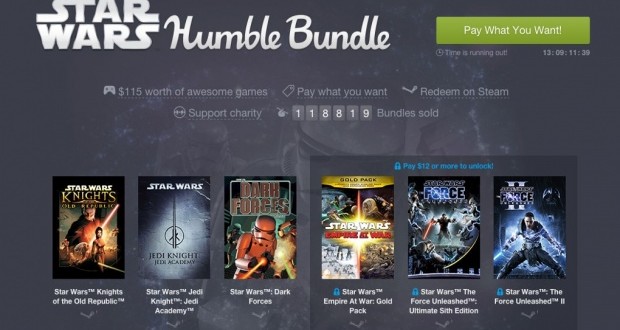 Humble Bundle, the site known for its pay-what-you-want policies, is offering numerous Star Wars titles in their latest bundle. The standard bundle includes Star Wars Knights of the old Republic, Star wars Jedi Knight: Jedi Academy, and Star Wars: Dark Forces. Spending more than the average price of $11.08 will earn the buyer three extra titles in the form of Star Wars Battlefront II, Star Wars Knights of the Old Republic II: The Sith Lords, and Star Wars Republic Commando. Lastly, if you feel like splurging, an offer of $12 or more will net you the additional games; Star Wars Empire at War: Gold Pack, Star Wars the Force Unleashed: Ultimate Sith Edition, and Star Wars the Force Unleashed II. All together, that’s 9 Star Wars themed games all for a staggeringly cheap $12.

The selection of games in this Star Wars Humble Bundle are valued at $115 when all bought separately. That means buyers could be saving more than $110 dollars if they buy through Humble Bundle. These massive savings and massive titles have resulted in over 80 thousand bundles being sold as of the writing of this article.  To top it off, buying into this bundle will be supporting two charities; UNICEF and Star Wars Force For Change. UNICEF, the United Nations Children’s Fund, aims to assist children and mothers in developing countries. Star Wars Force For Change, in collaboration with Bad Robot and UNICEF, is a new charitable organization which is “dedicated to finding creative solutions to some of the world’s biggest problems”. According to the official site, Star Wars Force For Change “will raise funds and awareness for UNICEF’s Innovation Labs and its innovative projects benefiting children in need.”

Those that buy the Star Wars Humble Bundle can choose how much of their money goes to which charity though in this case, the two are working closely together to achieve the same goal. The bundle will be available for 13 more days, get it now while you still can.